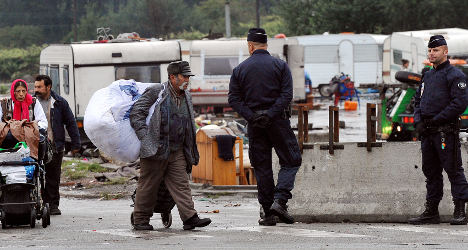 Police watch the final operation evacuating the largest Roma encampment in the Lille area. France continues to expel Roma from camps despite threats of sanctions from the EU. Photo: Denis Charlet/AFP

The 27 members of the Roma community, originally from Croatia,  whose trial began in Nancy on Monday, are accused of enlisting their wives and children, some as young as 10, to carry out burglaries across Europe.

The case has been described as a "landmark" trial by prosecutors as well as “extraordinary” by the policeman leading the investigation.

But it could not have come at more of a sensitive time with France deeply embroiled in a fierce debate about the country's policy of dealing with the Roma community, most of whom the country’s Interior Minister has claimed, do not want to integrate.

The trial in Nancy will no doubt provide extra fuel to those who are more inclined to blame the Roma for their own problems with integrating in France.

Burglaries carried out daily across Europe

On Monday the court heard how “captains and lieutenants" and their children, aged around 10-years-old,” carried out burglaries on a daily basis around Europe.

Gilles Weintz, the police officer who took charge of a complex probe into the families' activities, said they were behind more than 100 robberies carried out in 2011 alone, in France and neighbouring parts of Belgium and Germany.

"The burglaries were daily, all over Europe," Weintz said. "They never stopped: for the children it was like a form of military service."

Weintz said the prosecution would also present evidence of brides being bought then renounced when they did not bring in enough money.

The evidence against the families is based on the tapped phone calls of 120 suspects which the officer said had revealed a mafia-style structure in which clan chiefs were supported by a network of subordinate captains and lieutenants, who in turn ran the children at the bottom of the pyramid.

"Some of what we discovered was particularly shocking, like the father who asked his 12-year-old daughter to hide a stolen watch worth €80,000 in her rectum because he knew the police would not do body searches on minors."

Women traded on the strength of their stealing skills

The people trafficking charges related to the alleged purchase of wives for up to €180,000 each.

"The better they were at stealing, the higher the price was," Weintz added.

"Young looking women also commanded higher prices because they had a better chance of passing themselves off as minors."

The officer cited the case of a woman identified as Nathalie who had been bought but failed to live up to expectations by bringing in "only" €200,000 over two years

"A Roma court ordered her family to pay back €100,000 but the amount was finally reduced to 55,000 to take into account the sexual abuse she had suffered."

The children meanwhile were expected to bring in up to €5,000 per month each in the form of stolen goods that were then sold on, helping to finance luxury lifestyles for the clan chiefs, some of whom owned upscale properties in Slavonski Brod in Croatia.

The suspected supremo of the whole operation – a 66-year-old woman – is to be tried separately from the 27 suspects on trial here.

Lawyers for the defendants contest the people trafficking charges, saying the financial transactions were part of traditional dowry arrangements.

Defence lawyers also questioned whether their clients could reasonably expect a fair trial in light of the current atmosphere of hostility towards Roma in France.

The Roma row to break out in France was provoked by the outspoken Interior Minister Manuel Valls, who publicly backed France's policy of deporting Roma, because "most of them don't want to integrate" he said.

Those comments sparked a fierce backlash from Roma rights groups as well as other members of the government political elite. However an opinion poll published at the weekend suggests most French people are behind Valls when it comes to the Roma question.

The poll reveals 77 percent of French people agree with Valls and only 22 percent disagreed saying “he should not stigmatise a segment of the population”.

The opposition has been quick to pounce on an episode they say has once again exposed President François Hollande's tendency to dither when confronted with difficult decisions.

"A government where you have some ministers organising attacks on other ministers cannot last," said Francois Bayrou, the leader of the centrist MoDem party. "Coherence has to be re-established and that is the responsibility of the president and the prime minister."

The sniping at Valls from the Green and left of his own party continued unabated on Monday with Green Senator Esther Benbassa branding his attitudes on the Roma as "quite simply unacceptable."

She added: "These (Valls's) comments recall the darkest hours of our history. There is no such thing as a people who cannot be assimilated, only countries who do not make them welcome."