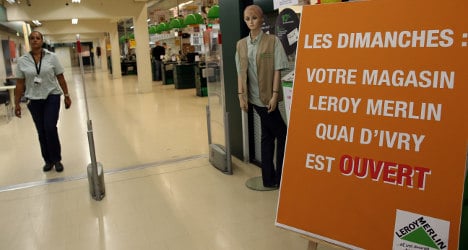 Defiance. A sign at the entrance of a French DIY store reads: "On Sundays, your Leroy Merlin store at Quai d'Ivry is open." That opening violates a court order last week. Photo: Kenzo Tribouillard

The French Prime Minister responded to the ongoing row over Sunday shop openings by announcing on Monday a review of the current framework of laws and regulations.

Jean-Marc Ayrault has tasked former head of La Poste Jean-Paul Bailly, to look at the "weaknesses of the current system, clarify the issues around the opening of some shops on Sundays and make a list of propositions to the government."

Bailly is set to present his conclusions to the government by the end of November.

However shortly before Ayrault's office at Matignon announced the review the country's Labour Minister Michel Sapin suggested that anyone hoping to see more shops open on Sundays should forget about it.

Sapin said the principle of “Sunday rest” would not be touched, despite defiant openings by retailers over the weekend, and protests by workers keen to put in extra hours.

“We have a rule – the principle of Sunday rest,” Sapin told journalists. “And it is out of the question that this rule should be touched,” he added.

“The previous government let the rules and laws pile up, with the result that now people don’t understand much [about the law on Sunday opening],” she added.

This ministerial back-and-forth comes after 14 DIY stores in the Paris area opened for business on Sunday, in direct defiance of a court order handed down last week.

DIY chains Leroy Merlin and Castorama had been ordered to shut 15 of their branches in the Ile-de-France region by a court in Bobigny on Thursday.

The trade tribunal labelled it a “flagrant violation” of French law that they had remained open while competitor Bricorama was forced to close its doors on Sunday.

Leroy Merlin and Castorama workers protested outside the court on Friday, demanding the right to work extra hours for extra pay.

In major cities such as Paris, some retailers are excluded from this ban on “travail dominical” (Sunday work) by being located in what’s known as a PUCE, or “périmètre d’usage de consommation exceptionnel” (exceptional consumer usage zone).

In cities of more than one million inhabitants, and in neighbourhoods which are popular with tourists, or already have a demonstrable tradition of Sunday consumer activity, retailers are allowed to open, but only on the strict condition that they not to force any of their employees to work on Sundays.

Centre-right UMP candidate for Paris mayor, Nathalie Kosciusko-Morizet (known as NKM), last week called for an “extension” of Sunday opening in the French capital, a move which she predicted could create 10,000 new jobs.

At the instigation of labour unions, France has seen a series of controversial  court orders recently, forcing multinational retailers like Apple to limit their opening hours, despite the desire of many employees to work more for extra pay.

Last week, a court ordered cosmetics giant Sephora to close its flagship Paris store on the Champs Elysées, at 9pm.

It had been staying open until midnight on weekdays and up to 1:00 am on Fridays and Saturdays to capitalise on demand for late-night shopping opportunities from tourists visiting the French capital.