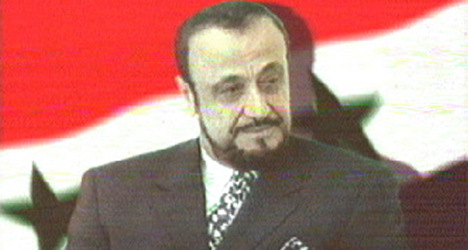 France has launched a corruption probe into the "extraordinary wealth", estimated in the billions, of Syrian president Bashar al-Assad's uncle Rifaat, pictured in 2000. Photo: ANN/AFP

Once a stalwart of the Syrian regime, Rifaat al-Assad broke with the government of his brother, then-president Hafez al-Assad, in 1984 and settled in Europe.

Hafez al-Assad was the father of current Syrian President Bashar al-Assad, whose regime is fighting in a civil conflict that has left more than 110,000 dead since it began in March 2011.

Before splitting from the regime, Rifaat al-Assad was accused of being responsible for the deaths of thousands during the crushing of an Islamist uprising in 1982.

The criminal complaint accuses Rifaat al-Assad of acquiring wealth "in the billions of euros" through corruption, embezzlement of public funds, misuse of corporate assets and other crimes.

French media have reported that his holdings include a mansion and several dozen apartments in Paris, with newspaper Le Monde estimating the total value of his estate in France at €160 million ($215 million).