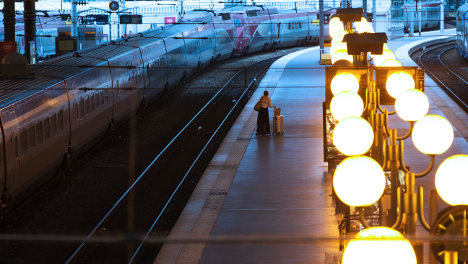 Easily identified by their distinctive, bleary eyes, they can frequently be spotted at dawn in and around train stations around one hour from Paris.

Once a rare species, the long-distance commuter is becoming part of France's social landscape, as a combination of sky-high property prices, digital technology and high-speed TGV trains push workers further and further away from their offices in the capital.

From places like Tours, in the Loire Valley, or Reims in the heart of Champagne country, a growing army of 'navetteurs' (shuttlers) have decided that the hassle of three hours a day of travelling is justified by the lifestyle payoff that comes with living out of the city.

Among them are a gang of regulars on the 6:53 am high-speed TGV train from Le Mans, a town best known for its famous 24-hour car race, 180 kilometres west of Paris.

"I call them my TGV buddies," says Benedicte Wiard, one of the group of professionals who are whizzed — most days, all being well — into the capital in just under an hour.

"The train is a bit like a second home, we have little parties, celebrate each other's birthdays and things like that," she adds.

The camaraderie makes it easier to endure delays and cancellations that can easily ruin the day of the long-distance commuter.

Hervé Rohee has been doing the Le Mans-Paris run since 2005. "When I started, it was supposed to be temporary!" he reveals. "I never thought I would still be doing it years later but now I'm not really thinking about stopping."

That reasoning is echoed by Pascal Mignot, who quit Paris for Le Mans ten years ago. "Your quality of life is so much better. I will never go back to Paris."

Not everyone is happy with their daily travel grind however. On the line from Tours, cutbacks by French railways have reduced the number of trains drastically and ageing infrastructure has resulted in travel times rising from 55 to 80 minutes, leaving many feeling cheated.

"With every year that passes I get a little bit more fed up," admits Frederic Potet, who moved to Tours 14 years ago.

"I was less than an hour from Paris — now with all the delays I can easily spend four hours a day on public transport. The myth of the provinces being one hour from central Paris has been exposed, commuters are asking themselves if they've not been conned."

"Then there is the problem of being neither a real Parisian, nor really from the place you live. It is hard to live in two or even three different places – your home, where you work and the train. In the end you don't live anywhere. It is a bit of a schizophrenic situation."

The widespread practice in France of employers refunding 50 percent of employees' travel costs has helped fuel the growth of long-distance commuting, although many companies are starting to balk at stumping up for season tickets costing between €450 and 600 ($600-800) a month.

And while some commuters may think they have the perfect work-life balance, those on the 6:53 from Le Mans all agree that the cost of their tickets is not the only price they have to pay for their travel arrangements.

"In my job (as a paralegal) a good manager is one who is still at his or her desk late into the evening," said Nicole Mouquet. That is not an option for the 55-year-old, who has to be on a train just before 6:00 pm if she wants to be home for dinner. "I get in early but there is nobody there to see that," she said.

"Some navetteurs on short-term contracts have ended up not having them renewed because train delays meant they were arriving late," adds Pascal Mignot.

But for all the problems, the trend remains strong enough to have had a ripple "TGV effect" on property prices in towns with good links to Paris.

With more than 4,000 shuttlers, Tours is perhaps the best example and prices in the centre of the picturesque town, within walking distance of the train station, have defied a downturn in the rest of provincial France, according to local notary Xavier Beaujard.