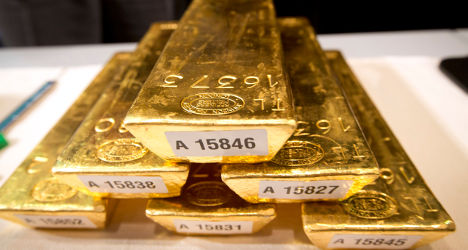 French police on Friday arrested six men in and around Paris over their suspected involvement in the theft of gold bars worth about 1.6 million euros ($21 million) from an Air France plane flying to Zurich.

Searches were also under way to recover the ingots and to pave the way for the suspects to be charged, a source close to the police investigation said.

The bars were stolen from the plane just before it left Paris's Charles de Gaulle airport on September 19. The theft was discovered the following day in Zurich.

The ingots, weighing around 50 kilos (110 pounds), were placed inside the plane by employees of the US security firm Brink's.

It is as yet unclear how the theft happened, but an airport source said the robbers had "probably made use of airport accomplices."

This kind of shipment takes place every day, and Brink's employees always stay on the tarmac until the plane takes off.

Brink's said in a statement that the gold bars were not under its "responsibility when they disappeared."

It was not known if any of the six men arrested were authorised to work in the airport's security zone.

In a separate case also involving Air France, police earlier this month seized a record haul of 1.3 tonnes of pure cocaine found in 30 suitcases on board a flight from the Venezuelan capital Caracas to Paris.