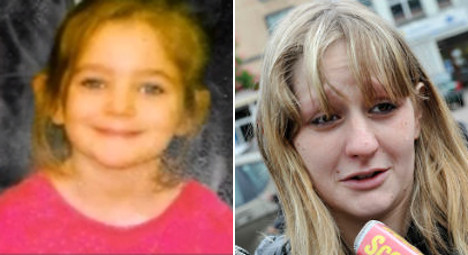 Fiona,aged 5, and her mother Cecile Bourgeon, who admitted after four months of appeals that her daughter had in fact been killed. Photo:AFP

A mother, had made a tearful public appeal for help in finding her daughter Fiona, aged five was expected to be charged in relation to her death after admitting to police this week that the girl was never missing but had in fact died at home.

French police have launched a search for the body of a five-year-old girl after a mother, who had made tearful appeals after reporting her daughter Fiona missing in May, finally admitted to investigators on Wednesday that the girl had died at home.

Bourgeon initially said she been 'accidentally punched' and then claimed her partner had beaten her to death in a drunken fury.

Around 40 police officers with three sniffer dogs scoured the border of a lake south of the central city of Clermont-Ferrand, where they had lived but the search was called off later in the day.

This dramatic video from Thursday evening, courtesy of Centre France, shows an angry mob charging towards a police car carrying Bekrane Maklouf, accused of beating five-year-old Fiona to death, to the Palais de Justice in Clermont-Ferrand.

This second video shows the same crowd shouting "whore" and charging at the car carrying Cécile Bourgeon, who admitted on Wednesday she had lied about her "missing" daughter, and hid her body herself.

Cecile Bourgeon, 25, told investigators in May that her daughter, Fiona, disappeared while she was napping in a park.

But her lawyer, Gilles-Jean Portejoie, said on Wednesday that she had now told police that her daughter was dead, her body buried close to the city of Clermont-Ferrand in central France. In May Bourgeon, then pregnant, had launched an emotional appeal, saying her daughter had been playing with another of her daughters, aged 2, when she went missing.

“I think about everything and nothing in particular. This is very hard, psychologically," the distressed woman told French media days after her daughter vanished.

The disappearance caused anguish throughout France.

Support groups were set up on Facebook and marches organized after the disappearance.

Although details emerged of a troubled family life, police initially worked on the theory that Fiona had been abducted from the park, sparking a nationwide search.

“By deduction, our primary theory…is that she could have been kidnapped and left the park with an adult,” local prosecutor Pierre Sennes told French media at the time.

But on Tuesday Bourgeon and her partner, Berkane Maklouf, were taken in for questioning by police in the southern city of Perpignan, where they now live, Portejoie said.

Three people close to the couple have also been held for questioning at Clermont-Ferrand.

Bourgeon's lawyer Portejoie said that Fiona "died accidentally following punches that were not delivered by (her mother) personally".

However her partner Maklouf has apparently contradicted this version of events.

“He admitted there was a domestic accident and acknowledged that the couple had invented a story. According to him the child choked on her vomit. They found her in the morning and panicked,” said his lawyer Xavier Capelet.

The lawyer said Maklouf also acceptedthat Fiona had been hit a few days before her disappearance but did not say by whom. "She was spanked to stop her from making herself sick," the lawyer said.

"They locked themselves in their lie. They were overwhelmed by the media coverage of this case," added Capelet.

According to reports in the French press sources close to the invstigation say the couple had been drunk with friends on the night before Fiona's presumed disappearance.

Investigators had wanted to arrest the mother back in August but at the time she was pregnant and they were forced to wait until she had given birth.

Reports in Le Parisien newspaper also claimed the couple had carried outonline searches on news websites about other stories of missing children, in the days before Fiona's 'disappearance'.

In August The Local reported how the Bourgeon had renewed her desperate appeal for help and even spoke to the media of her disappointment at the lack of solid leads in the search for her daughter.

“We’re still waiting for a solid lead. It’s very hard, but I have to keep fighting,” she added.

“Where I’ve been disappointed is that there have been so many testimonies which have led nowhere.”

“But if someone does have information, they must come forward,” Bourgeon had said.

The realisation that the couple had lied for the last four months left those who led the search for Fiona disgusted.

“What they have done is despicable. It’s horrible, indefinable and inhuman,” Stephane Pozzo told Europe1 radio.