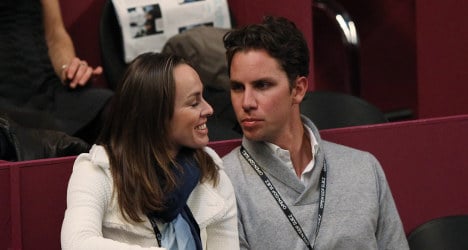 Police in the northern Swiss canton of Schwyz confirmed to AFP that Thibault Hutin was in the process of filing a complaint following an incident at the couple's apartment in the village of Feusisberg.

The 27-year-old French equestrian had talked to police on Tuesday about "serious problems" at his home on Monday evening, police spokesman David Mynall told AFP.

"He has started the process of filing a complaint, but it hasn't been finished yet," he said, not specifying the nature of the incident or who the complaint was being filed against.

Hutin, however, told Blick that his 32-year-old wife, the former world number one, her mother and her mother's boyfriend had "beaten and scratched" him.

The boyfriend had also struck him in the head with a DVD player, he said, adding that he was so "terrified" he had fled to Paris.

"I'm really afraid. What will be next, a bullet?" he asked in the interview.

Hingis, the winner of five Grand Slam singles titles, came back from six years of retirement in July this year to play doubles.

Hingis, who could not be immediately reached for comment, was reportedly in Tokyo to take part in a 30th anniversary celebration for the WTA tournament.

She had originally been set to take part in the Pan Pacific Open women's tennis tournament in Tokyo this week, but withdrew for "personal reasons," organisers said earlier this month.