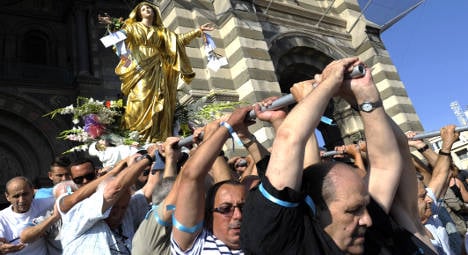 People carrying a statue of the Virgin Mary leave La Major Cathedral in Marseille, on August 15, 2013, during a procession celebrating the Christian feast of Assumption. Photo: Franck Pennant/AFP

Despite France’s long and often rigid tradition of church-state separation, a strict form of secularism known as “laïcité,” the French working calendar is dotted with several national holidays based on Christian festivals.

That state of affairs has for years angered strict secularists and atheists, as well as Muslims, Jews and members of other religious faiths, whose holidays are not similarly recognized by the French state.

This week, a senior French official reignited the debate by suggesting that two Christian festivals should be struck of the calendar of public holidays and replaced by one Muslim and one Jewish festival.

Her views have sparked a firestorm of controversy in France, with one Muslim leader condemning the idea as akin to “Stealing from Peter to give to Mohammed.”

'Why not a holiday for Sikhs and Freemasons, too?'

Dounia Bouzar, newly appointed to the National Observatory on Secularism, mooted the plan in an interview with Challenges magazine on Monday.

“At the moment, every French person celebrates Christmas, and I think our public holidays should include one Jewish festival and one Muslim festival,” she said.

Rather than simply adding those dates on to the list of public holidays, however, the anthropologist insisted: “We must replace two Christian festivals with Yom Kippur and Eid.”

Catholic priest and journalist, Fr. Stéphane Le Messin, for his part, rejected the idea out of hand.

“Christianity is an integral part of French culture,” he told The Local. “Yes, there have been Jews in France for many years, and Muslims as well, though to a lesser extent, but the difference is that these religions are not an important part of French history, in the way that Christianity is,” he added.

“Also, the majority of French people are Christians. If we added Jewish and Muslim holidays, why not a day off for Sikh festivals, or a national holiday for Freemasons?”

Bouzar’s idea has also received criticism from the Muslim community. said the Muslim and Jewish festivals should be added to the Christian ones, rather than replace them.

“It’s totally normal to consider other [religious] communities, but we should simply add these two festivals, and not replace any,” Abdellah Zekri, president of France’s Observatory against Islamophobia, told French daily Le Figaro.

“Otherwise, people will say, ‘They want to rob Peter to pay Mohammed,’” he concluded.

French Jewish groups have voiced their opposition to the idea to add Yom Kippur to the calendar of national holidays.

Elie Petit, vice-president of UEJF (French Union of Jewish Students), a group which actively opposes anti-semitism and racism in French society, was pragmatic in his view of the proposal.

“There’s just no great need or demand from within the Jewish community, or wider society, to change the current system of public holidays,” he told The Local.

“We don’t consider it discrimination that there are Christian national holidays – France is a secular country but with a long Christian history, so it’s natural that the state would acknowledge that heritage in certain ways,” he added.

“In any case, students and workers in France are already entitled by law to take days off for their own individual religious festivals, so we don’t see any reason to change things,” he concluded.

Since the controversy erupted over her statements this week, Bouzar has backed down somewhat.

“It was just a thought, not an actual proposal,” she told Le Figaro on Thursday. Bouzar claimed that radical Islamists in France were feeding off a widespread feeling of alienation and marginalisation among French Muslims, and that recognizing a Muslim holiday could undermine radical recruitment.

“So I said to myself that giving Jewish and Muslim festivals a symbolic place [in the French calendar] could be one way to pull the rug from under the feet [of sectarianism].”

Is it unfair to have Christian holidays, but not Jewish or Muslim ones? Join the conversation in the comments section below.