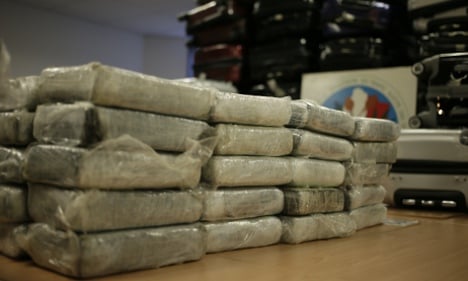 1.3 tonnes of cocaine that was seized from an Air France flight from Caracas to Paris. Photo: Kenzo Tribouillard/AFP

Two Britons and three Italians were charged Tuesday with smuggling 1.3 tonnes of cocaine worth an estimated €200 million ($270m) into Paris on an Air France flight, a judicial source said.

The drugs were concealed inside 30 suitcases that were placed on a plane from the Venezuelan capital Caracas to Paris on September 11.

Paris judges charged the five men, aged between 26 and 45, with importing and trafficking narcotics in an organised gang, the source said.

Venezuelan authorities, meanwhile, have detained 10 people in connection with the drug bust, including an officer from the anti-drug unit of the Bolivarian National Guard and two National Guard sergeants.

According to police sources, the drugs arrived in France on September 11 but were not seized until the 20th, the investigators apparently having allowed time to see who was picking them up.

Part of the haul was seized at the airport and some on a truck headed towards Luxembourg – a route which suggests the end destination could have been the Netherlands or Britain.

British, Dutch and Spanish police were involved in the operation that led to the seizure, the biggest ever on French soil.

Venezuela has indicated that the traffickers must have had assistance from people working within Air France's operation at Caracas airport. According to Rodriguez, it is “nearly evident” that there were accomplices working with the airline.

“How can the cocaine shipment reach France and it gets taken out without going through the normal controls?” he asked.

Agents are scrutinizing footage taken from security cameras at the Simon Bolivar International Airport and interrogate personnel that work in the airport luggage area, he said.

Rodriguez, who is also head of the country's intelligence service, said that he assigned a special team of prosecutors to the probe.

Also on Tuesday five members of the Venezuelan military were among seven people arrested following the seizure of 1.3 tons of cocaine aboard a airliner that flew from Caracas to Paris, prosecutors said Tuesday.

That raised to 10 the total number of detainees in Venezuela, not considered a big producer of the drug but rather a transit point for shipments headed from Peru and Colombia to the United States and elsewhere.

A total of 45 tons of cocaine were seized last year in Venezuela, according to government figures.

Air France have also announced that they have launched an immediate investigation into how the drugs were able to make it onto the plane.

Cocaine comes from coca leaves grown in countries like Colombia, Peru and Bolivia. Venezuela does not produce cocaine, according to United Nations monitors, but drug traffickers are increasingly using its territory to smuggle drugs into other nations.