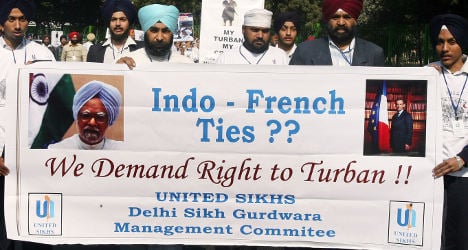 The contentious issue pits the cherished French principle of secularity in public life and institutions against the essence of the Sikh religion, which requires followers to keep long hair as a mark of their faith and piety and a turban to cover the tresses, worn as a bun on the top of the head.

France's Education Minister Vincent Peillon has unveiled a new charter on secularity which must be displayed in government-funded schools explaining in child-friendly language why the Jewish skullcap and the Star of David, the
Sikh turban, crucifixes and the Islamic veil are taboo.

But the 30,000-strong Sikh community in France argue that they are the victims of ignorance.

They see the recent official emphasis on secularism as being primarily the result of opposition to the Islamic veil and broader tensions with the largest Muslim community in Europe, and say they have been caught in the crossfire.

"We are currently in talks with (Interior Minister) Manuel Valls to explain our unique situation and to be exempted from this law," said Kashmir Singh, a member of the management committee of the largest gurdwara or Sikh temple in France, located in the Paris suburb of Bobigny.

"We have also met Manmohan Singh asking him to put pressure on France for justice to be done," he said, referring to the Indian prime minister who is also Sikh.

Singh added: "Our children are dropping out from school or being expelled for keeping the faith. The cross, the veil and the kippa are not mandatory and are symbols. But the kesh (long hair) and the pagri (turban) are non-negotiable. They are not symbols but a sacred, inherent and intrinsic part of our religion."

Ten students have been expelled since the law on secularity in schools came into force in 2004, according to official records.

But the true number of children affected is much higher since many Sikhs have opted for private schools or home learning rather than give up the turban, said Ranjit Singh, a community spokesman who liaises with the
government.

"Also many Sikh families are ashamed of the fact that their children have been expelled and do not tell us so there are no complete records," Kashmir Singh added.

Ranjit Singh was one of the first Sikh boys to be expelled from his lycee, or high school, after the 2004 law. That left deep scars but he has moved on since and is currently pursuing a doctorate at the prestigious Sorbonne university in Paris.

"I opted for the liberal professions because I then decided I would work for myself as I was sceptical about getting a job that would allow me to keep my turban," he said.

Sikhism was founded five centuries ago in the Indian subcontinent and its cornerstones are the principles of equality and fraternity. It was a reaction to the Hindu caste system and the prevailing Islamic perception and treatment of non-believers as "infidels".

Turban makes everybody a king

The religion does not seek to proselytise. And its only link with terrorism has been confined to India and Indian targets in the wake of a now defunct separatist movement to carve a Sikh homeland called Khalistan out of the
Indian state of Punjab.

The extremist attacks peaked after then Indian prime minister Indira Gandhi controversially ordered the June 1984 storming of Sikhdom's holiest shrine to flush out separatists holed up inside.

That military operation led to Gandhi's assassination in October of that year by two Sikh bodyguards which sparked a wave of anti-Sikh riots in India and claimed thousands of lives. But Sikh extremism has since died out.

Bikramjit Singh, a suave 27-year-old working as an engineer, was also expelled from his school in 2004. He argues that the turban symbolised
equality – the fundamental pillar of the French Revolution of 1789.

"In medieval times in India only the Muslim aristocracy and officials were allowed to wear turbans, while among the Hindus it was only reserved for the priestly class. Our religion undid all that," he said.

Another problem for Sikhs – who have won landmark legal battles on the turban issue in the United States, Britain and Canada among other countries – is that they are often mistaken for Muslims in the aftermath of the 9/11
attacks because of their headgear and beards.

A recent study conducted in the United States by Stanford University and an advocacy group showed that more than two-thirds of Americans could not identify Sikhs by their turbans and most mistook them for Muslims.

The situation is the same in France, said Joginder Singh, a middle-aged carpenter and odd-jobs man.

"The British have been able to manage and integrate their former subjects far better, while in France they are still struggling to deal with north Africans and Muslims," he said. "And meanwhile we become the casualties of this mess."