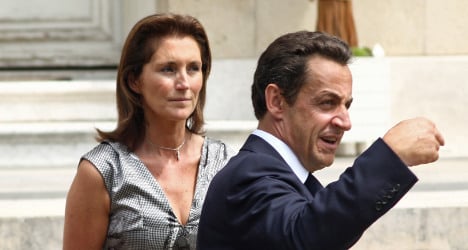 The Then French president Nicolas Sarkozy (C) gestures close to his wife Cecilia and guests during a reception as part of the Bastille day celebrations, 14 July 2007 in Paris. Photo:Mehdi Fedouach/AFP

Publisher Flammarion said the book will come out in the middle of October but did not divulge details either on the title or the contents.

But Sarkozy's second wife, who left him shortly after his election, is expected to shed light on controversial aspects of her short stint as France's First Lady.

That includes her two visits to Libya in July 2007 and meetings with dictator Moamer Kadhafi to secure the release of five Bulgarian nurses and a Palestinian doctor who had spent years on death row after allegedly being tortured into confessing to infecting Libyan babies with the HIV virus.

Just after their divorce was announced in October 2007, Cecilia said in an interview that she had first left Sarkozy for Richard Attias, who is now her third husband, in 2005. She returned to Sarkozy but the couple were unable to repair the damage done to their marriage.

"What happened to me has happened to millions of people: one day you no longer have your place in the couple. The couple is no longer the essential thing of your life. It no longer functions; it no longer works," she said.

Sarkozy has admitted he made the great mistakes of his first weeks in office – celebrating victory in a Champs-Elysees restaurant and on a billionaire's yacht – at a time when he was feeling the stress of his
imminent break-up with Cecilia.

He went on to marry former supermodel Carla Bruni in February 2008 while Cecilia, who turns 56 in November, married Attias a month later in New York.

Sarkozy has not been active in frontline French politics since losing the 2012 presidential election to Francois Hollande.