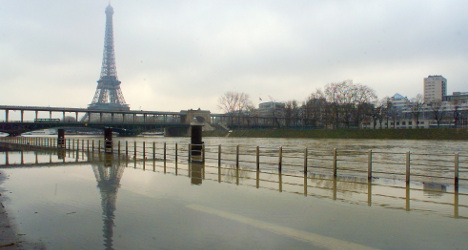 A major flood, akin to that of 1910, could have disastrous consequences for Paris and the surrounding area, due to "bureaucratic overlap", according to two reports. Photo: Jack Guez/AFP

Paris remains dangerously unprepared if a major flooding of the Seine river were to occur in the near future, according to a recent preliminary report by the Paris based Organisation for Economic Cooperation and Development (OECD).

The report has once again put the subject of the risk of parts of the French capital being washed away in a torrent of flood water back on the table.

“The absence of a unified strategic vision surrounding the major risk to this strategically essential area reveals a deficit in risk management policies,” said the report, parts of which were shown to AFP.

The OECD went on to contrast preparations in the Ile-de-France area around Paris, which is bisected by the Seine river, with those for the Loire and Rhône regions of France.

“The probability of a major flooding of the Seine, akin to [The Great Flood of Paris in] 1910, can’t be neglected, when you look at what’s at stake and the vulnerability of people and assets now located in flood-prone parts of Ile-de-France, a flood of that nature would directly and indirectly affect five million citizens, and numerous businesses,” the report claimed.

Given that the Paris area accounts for one third of France’s economic activity, such a catastrophe “would have a significant national impact on a macro-economic level,” the report added.

What’s preventing proper preparations for a “flood of the century”? According to the OECD, bureaucratic overlap and a lack of communication between national, regional and local operations are placing the Paris area at risk.

Elsewhere, a new report by insurance analysts Swiss Re has found that, when it comes to the risk of natural disasters, Paris is one of the world’s most exposed cities.

Measured in terms of “working days lost,” the French capital ranks ninth in the world in terms of the damage likely to ensue after a flood, storm, storm surge or earthquake, the report found.

French officials have long feared a repeat of the infamous Great Flood of 1910, but the two reports are only the latest developments to evoke the extent of that risk.

Earlier this month, The Local reported how many thousands of artworks were set to be transferred from storage underneath the Louvre museum in Paris, to a location in northern France, due to the risk that a flooding of the Seine could destroy them forever.

For his part, Eric Defertin, in charge of crisis management for the city of Paris, warned that “in principle, the streets of Paris are protected up to a [water] height of 8.62 metres, i.e. the same level as in 1910.”

Any more intense flooding than that, though, would place the inhabitants of the city of light in serious danger.

As a result, officials have devised an emergency plan of action, code-named Operation Evagglo, which was tested on December 6th after Parisien experts visited parts of the eastern United States hit by Hurricane Sandy in October.