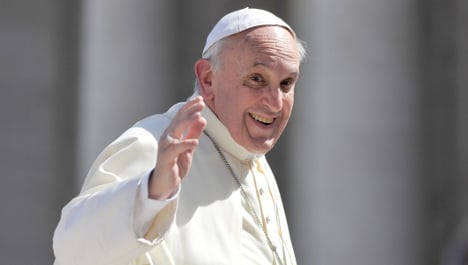 The meeting has been organised by Marek Halter, a French Jewish author known for promoting religious tolerance who has organised similar initiatives in the past.

"I thought: Here's a pope who can do what the previous pope didn't do. He can reconcile Christianity with Islam," Halter said.

Relations between the Vatican and the Muslim world were strained in recent years and Al-Azhar, Sunni Islam's Cairo-based highest seat of learning, broke off ties with Francis's predecessor Benedict XVI for what it regarded as controversial statements.

Benedict had strongly called for protection of Christian minorities after a January 2011 suicide bombing at a church in Egypt.

He also sparked fury in the Muslim world in 2006 when he recounted an anecdote in which a Byzantine emperor described Prophet Mohammed as a warmonger who spread evil.

But Francis has made several conciliatory gestures. In August he called for "mutual respect" between Christianity and Islam.

The public meeting is due to take place in Saint Peter's Square in Rome during the weekly papal audience, and will last some 15 minutes.

Hassen Chalghoumi, a Muslim community leader in the Paris suburb of Drancy who is in favour of France's burqa ban, will be among those travelling to Rome aboard the plane of Tunisian film producer Tarak Ben Ammar, a friend of Halter's.