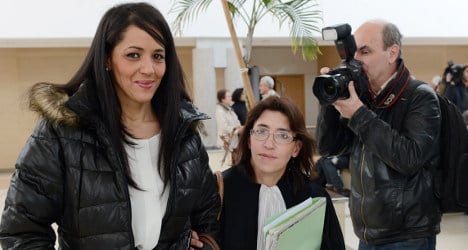 A court of appeal in the city of Nimes, southern France, convicted Jihad’s mother Bouchra Bagour and his uncle Zeyad for “glorifying a crime” in relation to the terrorist attacks in the United States on September 11th 2001.

“We have to rule that they (the mother and uncle) knew of the provocative nature of the T-shirt,” said the counsel for the prosecution.

She had claimed the stunt was just “a joke” and not been intended to cause offense.

The court handed the mother a one month suspended prison sentence as well as €2,000 fine.

Jihad’s uncle, who bought the sweater for the boy, was slapped with a €4,000 fine and a two-month suspended prison sentence.

The court head how the uncle had bought the top and given it to the mother, who dressed him in it and took him to school on September 25.

Both of them previously pleaded their innocence in court, claiming they thought the T-shirt would “make people laugh”.

“For me the text is simply my son’s name and his date of birth,” Bagour had said. “It’s a bit different but I thought it would make people laugh.

For his part, the uncle Zeyad, 29 said: “I had no intention of being provocative or shocking people.

“Idiocy is often the best alibi to hide our real intentions,” said Claude Avril. “The most scandalous aspect of this is the manipulation of a three year-year-old to convey the words of terrorism.”

The pair had previously been found not guilty by a court in Avignon earlier this year, but following that decision prosecutors decided to take the case to the court of appeal.

After the appeal judge overturned the acquittal on Friday, defense lawyer Gaële Guenoum said the ruling was “severe, surprising and amazing” adding she was considering taking the to the supreme court.

There was another significant legal case brewing in France on Friday after a webmaster became the first Frenchman to be charged with the offence of “provoking terrorism”.

The 26-year-old Muslim convert, identified as Romain, was held on Tuesday accused of translating sections of the Jihadist magazine “Inspire” into French.