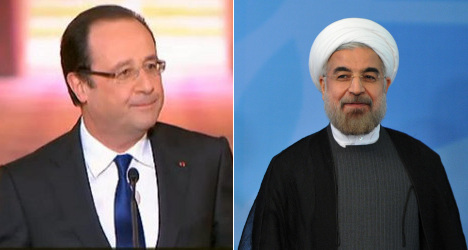 The announcement comes amid growing signs the recently-elected Rowhani could also meet with US President Barack Obama in New York in what would be a landmark moment for Iran's relationship with the United States and the broader international community.

Officials said the meeting with Hollande on Tuesday had been organised at the request of Iran and would focus on the crisis in Syria and Iran's nuclear programme.

"What we want to see is an Iran fully engaged, like other players, in the search for a real political transition in Syria," an aide to Hollande said.

Rowhani has offered to mediate between the Syrian regime and the opposition but French officials said that was unlikely to happen soon, judging the government in Tehran to be too close to the regime of Syrian President Bashar al-Assad.

"We all know the role Iran has played at the side of the regime," foreign ministry spokesman Philippe Lalliot said on Friday. "They themselves acknowledge providing military, not just political, support."

Hollande's staff did not however rule out Iranian involvement in the event of Syrian peace talks resuming in Geneva. "When the time comes, we will have to involve all the players directly concerned," an official said.

Unlike the United States, which has no diplomatic relations with Iran, France has always maintained links to the Islamic Republic, although the relationship has soured in recent years, particularly over the nuclear issue.

Iran says its nuclear programme is a peaceful one aimed at giving it the means to generate power from non-carbon sources. Israel and the West believe the programme is a front for an attempt to acquire a nuclear weapons capacity.

"There has been little progress in talks on the nuclear issue because, until now, the Iranian position has been extremely intransigent," the French official added. "Now there is hope of an opening and the message we will be sending is that it is time for Iran to accept the gravity of the crisis and the need to make the necessary gestures."

Rowhani was elected in June on a promise to build bridges with the West in the hope of securing an easing of economic sanctions that have brought the country's economy to its knees.

Rowhani has reportedly been offered a free hand by Iran's Supreme Leader Ayatollah Ali Khamenei and hopes are high for some kind of encounter with Obama in New York next week.