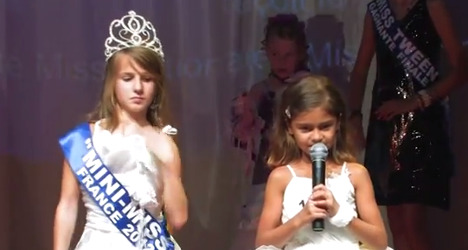 On Tuesday senators in France voted to ban children's beauty contests to prevent the "hyper-sexualisation" of kids, promising tough sanctions for those who break the law, including a two-year prison sentence.

“Let’s not let our daughters think from such a young age that they will be judged according to their appearance. Let’s not let commercial interest impact on social interest,” Senator Chantal Jouanno told the Senate.

The ban, which needs to be backed by National Assembly deputies later in the Autumn before becoming law, was warmly received and has even had an impact over the Atlantic, where the public in the US, considered the home of kids' beauty pageants, are now mulling the merits of a similar ban.

But the Senate's vote has not been well received everywhere, not least by Michel le Parmentier, organizer of the annual "Mini-Miss" pageant in Paris. Here he tells The Local why his contests are light years away from the "barbie doll" beauty pageants in the US and how dressing up like a princess can help girls in later life.

Le Parmentier: “You can’t compare the kind of child beauty contests that take place in the US with those in France. In the US it’s all about looking sexy. They are dressed up in high heels, given false wigs, fake tan, fake teeth and transformed into Barbie dolls. That might be good for them but we don’t want that in France. Their parents push them into it because there is money at stake for the winners. That’s terrible.

“In the French 'Mini-Miss' pageants, the young girls don’t wear swim suits or high heels, make up and so on.

“This is not Miss Universe where the women are in bikinis and they show their bodies and their chests. There’s no hyper-sexualisation in the 'Mini-Miss' contests. It’s all a bit of fun.

"I invented this concept of 'Mini-Miss' in France over 20 years ago and until recently there were no problems what so ever. But then came the broadcast of an American beauty contest on NT1 channel called 'Mini-Miss – who will be the most beautiful' (Qui sera la plus belle?).

"It showed the little girls in high heels, covered in make-up, wearing swim suits etc and everything changed in France. We tried to persuade broadcast authorities to ban the screening of the programme in France but with the Internet people were still able to watch it. It shocked people and that is why the senators made this amendment this week. "'Mini-Miss' can help them in later life"

“For us it is not about trying to transform a girl into a woman. It is just about dressing up as a princess. They are judged on the dress and on their attitude and personality. The winner will be the cutest, the one who smiles etc and isn’t grumpy.

“I have discussed this issue with Chantal Jouanno, the senator who proposed the ban. She does not want girls to be judged on their appearance at such a young age but that’s not what we do. 'Mini-Miss' is not about saying one is more beautiful than the other. It's about educating them to be well dressed, polite and positive in their own skin. It helps them in later life.

"Two years in prison is too strong. Mums of 'Mini-Miss' contestants are in uproar and their daughters are crying because they won’t be able to dress up like princesses. They plan to protest to the deputies in the National Assembly to lift the ban.

The choice is for parents to make, not the state

“It’s not up to the state to choose whether these contests take place it's up to the child and the parent as to whether they enter. If parents don’t want their daughters to like dressing up like princesses then they have to educate them how they want.

“Stopping hyper-sexualisation of children is up to parents not up to us. They can’t allow their daughters to go out into the street dressed up in mini-skirts etc because they will get attention from some bad people.

“Obviously there are some child beauty contests being held in France that we have no control over and they do make the children wear swim wear and so on but that's why we are calling for regulation, not a complete ban."

Do you agree with Le Parmentier? Let us know in the comments section below.