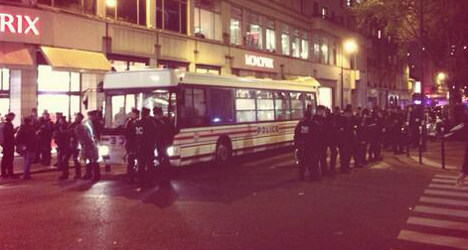 Police near the Eiffel Tower arrest 38 anti-fascists who had come to a local bar "to start a fight" with far-right rivals, after a rally for slain Greek rapper Pavlos Fryssas. Photo: @Thomas_M41

Police arrested a hoard of anti-fascists on Thursday night after they descended on a bar near the Eiffel Tower in Paris “to start a brawl” with far-right extremists, according to the police prefecture.

The group had come from a rally in honour of Pavlos ‘Killah P’ Fissas, an anti-fascist Greek rapper stabbed to death in Athens on Wednesday by a suspected member of the neo-nazi Golden Dawn party.

Some 38 of them were rounded up and arrested after arriving at a bar in the city’s 15th arrondissement, known to be frequented by members and associates of the far-right group Printemps Français, a hard-core group of anti-gay marriage activists.

“They arrived at this establishment, clearly for the purpose of starting a fight,” a police representative told French daily Le Parisien.

“However, there was no confrontation and no brawl between the two camps,” they added.

Tensions have been high between left and right-wing extremist factions in Paris in the last few weeks, with the prefecture of police banning two rival marches planned for September 14th in the city.

One was to have been in honour of Clément Méric, an 18-year-old anti-fascist activist and university student who died after a fight with far-right extremists in Paris in June.

His death sent shockwaves throughout France, and drew condemnation from all sides of the political spectrum.

In the ensuing weeks, France’s Socialist government banned four far-right extremist groups, two of which had ties to those implicated in the death of Méric.

The second rally was set to express solidarity with 20-year-old Esteban Morillo, a far-right activist likely to face manslaughter charges for his alleged role in the death of Méric.

Paris police found the likelihood of disorder and violence surrounding the rallies too high, and banned both.

Two weeks ago, however, Morillo made the surprise move of changing defense lawyers and distancing himself from far-right groups who had planned the demonstration for last Saturday.

“Esteban Morillo wishes to defend himself alone, on the basis of the facts, and only the facts,” his new lawyer was quoted as saying by French daily Le Nouvel Observateur.

“He does not want to become the flag-bearer for groups which have emerged during this affair," he added.

Speculation has been rife over the moments that lead up to the fatal punch delived against Meric.

Reports in the French press this week poured doubt on earlier claims, based on CCTV images, that the left-wing militant had thrown the first punch.