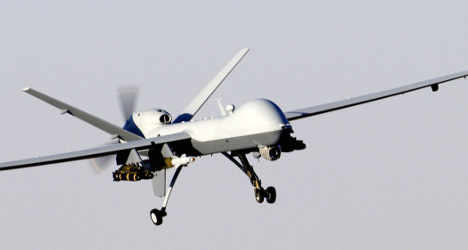 Could we soon see drones flying above the crime-sticken city of Marseille? File photo: GeeJo/Wikimedia

Eugène Caselli, the Socialist Party president of the Marseille urban community, and mayoral candidate, proposed on Thursday that drone aircraft be used to seek out drug-dealing and violent crime on the backstreets of the city, which has been hit by a spate of gangland murders.

“Once police get intelligence on gangs of drug-dealers and how they embed themselves in the city, how they move about, and how they sell drugs, that’s when it’s time to deploy the drones,” Caselli told French radio Europe 1 on Thursday.

“Everything is filmed, and it’s better than a classic police stakeout,” he added.

According to Europe 1, Caselli’s drone plan has the backing of police chief Jean-Paul Bonnetain, and local government authorities in the Bouches-du-Rhône department are already willing to spend €1 million on it, with each drone costing €50,000 a piece.

The light, ultra-quiet aircraft would be operated by remote control at a distance of within one kilometre, and observe and film interactions on the street from a height of around 150 metres.

“You can deploy them in less than a minute to go and figure out a situation,” said Pascal Zunino, director of the drone manufacturer Novadem, which sells the aircraft to the French military.

“Instead of a standing camera, which is always in the same place, a drone is never in the same place. That’s what allows it to break habits and have various points of view on a situation, by day and night,” he added.

Despite these benefits, Caselli's plan will have to pass legal hurdles at a national level in France, where drones are at present only used by the military, after the purchase of two Reaper drone aircraft from the United States, earlier this year.

Among the concerns which Interior Minister Manuel Valls and Justice Minister Christiane Taubira will have to contend with, are fears the drones could risk invading the privacy of law-abiding Marseille residents.

"Before we send in drones, let's see exactly what the police can achieve when given proper resources to do their jobs," he told The Local.

"If we have €1 million to invest in a technological solution like drones, surely we have the means to equip French police officers who are dedicated and trained to gain intelligence on criminal networks, and to break them up."

"After all, it's not enough to just film activities from above – we need to make arrests and process these people through the courts, and for that we need hard proof. The kind that comes from police officers on the ground," he added.

In August, Marseille's 13th gun murder in 2013 alone prompted no less than five French government ministers, including PM Jean-Marc Ayrault, to rush to the Côte d'Azur city, and Valls announced the deployment of reinforcements from France's CRS riot police.

Earlier this month, however, he was forced to call for a "national pact" to end gun violence in Marseilles, after Adrien Anigo, son of the director of Olympique Marseille football club, was shot dead in a northern suburb of the city.

A survey found last week that nearly 60 percent of the French public favoured sending the army to the crime-ridden city, a move which is beginning to gain traction after being dismissed by the ruling Socialist government last year.

"Marseille is not at war," said former Socialist presidential candidate Ségolène Royal. "But given the proliferation of these weapons, why not envisage cooperation between the police and the army to seize and destroy them?" she added.

However, police union chief Reverdy was withering in condemning such talks. "Marseille is not Pyongyang in North Korea,"he told The Local.

"The army is trained to kill in the context of a war, they are not trained to deal with disorder on France's streets. They work under different laws than the French police.

"The police are quite capable of restoring order in Marseille, but there needs to be will power from politicians and they need to be given the necessary means," he concluded.

A drone equipped with a high-definition camera, meanwhile, has filmed a very different side to Marseille, this year's European Capital of Culture.

This short video by DroneCast shows breathtaking views of the city – in particular the basilica of Notre Dame de la Garde, and the "Bonne Mère" statue of the Virgin Mary, regarded by many as the spiritual centre of Marseille.