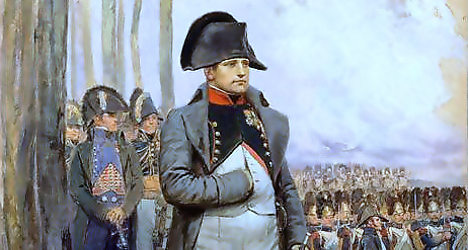 I want my ashes to rest on the banks of the Seine, among the French people whom I loved so much.” Photo: 'Napoleon in 1806', by Edouard Detaille/Wikimedia

Paris auction house Drouot announced on Thursday it was to auction two codicils (ammendments) to the final will of Napoleon Bonaparte, written by hand, just days before the French emperor died in British captivity on the South Atlantic island of St. Helena in 1821.

In one, penned on April 16th of that year, the general wrote the famous words: “I want my ashes to rest on the banks of the Seine, among the French people whom I loved so much.”

Elsewhere in the two pages of manuscript he bequeaths his money, furniture, jewellery, books and weapons to many supporters during his six years of enforced exile on St. Helena, and especially to “my good and dear mother.”

In the moments his death the former French emperor, whose health had been waning, is said to have told his right-hand man, General Montholon: "My boy, it is time for me to finish. I feel it."

Napoleon writes of his worry that his British jailers would either seize his possessions or destroy his will, and instructs Montholon, to make a copy of the codicils.

The codicils are the only surviving original copies of Napoleon’s will still in private hands, having been entrusted to General Montholon before his death, and passed through Montholon’s family for generations, before ending up in the possession of the current owners.

Notably, Napoelon writes in the codicils that the items he hands down are bequeathed on the sole condition that they not be sold off at any time, a wish that, over the centuries, has been ignored.

In February, The Local reported how Paris auction house Osenat sold off a gold, diamond and sapphire engagement ring offered by Napoleon to his first wife Josephine, in 1796.

In June, however, Osenat cancelled their controversial planned auction of Napoleon’s copy of the Quran, taken by him from a famous mosque in Cairo, during his military campaign in Egypt.

After strong opposition in Egypt and representations from Cairo's embassy in Paris, the auction house’s director, Jean-Pierre Osenat, said he had “independently” decided not to go ahead with the sale.

"We are aware of the feelings that the proposed sale has provoked in Egypt and after friendly exchanges with the embassy, we decided to withdraw the manuscript from this weekend's sale," he said at the time.