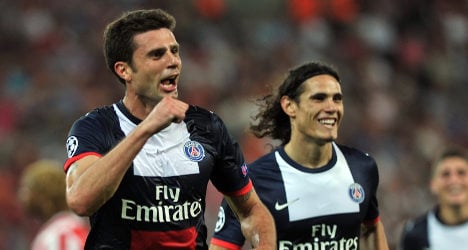 An utterly commanding second-half performance helped Paris Saint-Germain begin their Champions League campaign with a 4-1 win against Olympiakos in Greece on Tuesday.

Edinson Cavani had put the French champions ahead at the Georgios Karaiskakis Stadium with 19 minutes on the clock, but Olympiakos deservedly drew level six minutes later courtesy of a fine individual effort by Vladimir Weiss.

However, PSG upped their game after the restart and were rewarded for their efforts when Thiago Motta twice headed home from corners.

Zlatan Ibrahimovic saw a 82nd-minute penalty saved before Marquinhos marked his debut with a late headed effort to wrap up an excellent win.

The Ligue 1 club are hoping to improve on last season's run to the quarter-finals, where they were a little unlucky to lose on away goals to Barcelona, and their new coach Laurent Blanc was desperate to get off to a positive start in Group C.

Blanc, who led Bordeaux to victory against Olympiakos in the last 16 in 2009-10, handed Brazilian summer signing Marquinhos his long-awaited debut in central defence with Alex missing due to injury, while Maxwell and Cavani were also restored to the starting line-up.

Against such an expensively assembled away side, Olympiakos were relying on the notoriously hostile atmosphere of their ground in the Athens port of Piraeus to tip the scales in their favour, and Michel's side came flying out of the blocks.

Slovakia winger Weiss crashed an effort off the bar inside the opening minute before David Fuster rattled the post from the edge of the area after PSG had failed to deal with a corner.

However, it was the visitors who took the lead against the run of play thanks to a goal from their record 64 million-euro ($85.5 million) summer recruit Cavani.

The Uruguayan just stayed onside to connect with Maxwell's square pass and slide the ball into an empty net after a superb Ibrahimovic pass had cut open the home defence.

The lead did not last long, however, with Weiss restoring parity in remarkable fashion, nutmegging Marquinhos and sidestepping Thiago Silva before finishing past Salvatore Sirigu in goal with the help of a deflection off Gregory Van der Wiel.

Olympiakos spent much of the opening period in the PSG half but it was the visitors who enjoyed most of the possession and the introduction of Ezequiel Lavezzi at the interval in place of Lucas helped swing the game definitively their way.

Roberto turned a powerful Cavani shot around the post as PSG pressed, and Blanc's side retook the lead in the 68th minute when Lavezzi's corner from the left was headed in by Motta, who had escaped the attentions of Andreas Samaris inside the area.

Five minutes later, Motta scored again with a near-identical goal, getting away from Samaris to head in Lavezzi's corner.

Brazilian-born Italy international midfielder Motta has never been a prolific scorer but his goals ended Olympiakos's hopes, and they crumbled towards the end.

Ibrahimovic missed from 12 yards after being upended inside the box by the hapless Samaris, but Marquinhos capped his first appearance for PSG with a goal as he headed home in the 86th minute, the home defence again going missing at a corner.

Fresh from this result, PSG will next face Benfica at the Parc des Princes early next month in a game which is likely to be pivotal, especially after the Portuguese club won their opening Group C game 2-0 against Anderlecht.

Marseille may be the outsiders in a testing Champions League Group F, but Arsenal manager Arsene Wenger knows his team cannot afford to underestimate the French club on Wednesday.

The two clubs renew acquaintances at the Stade Velodrome in their group opener on Wednesday, two years after their last meeting in the south of France, when a last-gasp Aaron Ramsey goal secured a 1-0 win for the Gunners.

A limited Marseille side surpassed expectations to reach the quarter-finals that season and, with many of those who participated in that campaign remaining on the books, they have progressed under coach Elie Baup.

"It is the toughest group. All four teams have a chance of qualifying," said Wenger at an eve-of-game press conference at the Velodrome on Tuesday.

"On average, you need 10 points to qualify. We can't say now that we will get nine points at home, so the start of the competition is very important for the confidence of the team. We will try to win.

"Marseille is a city where the people are always very passionate and the team is usually very hard to beat," he said ahead of the match at a ground which retains a wonderful atmosphere despite currently being closed on one side for reconstruction.

"They are strong defensively, physically strong. And they have a fearsome attacking quartet of (Mathieu) Valbuena, (Andre) Ayew, (Dimitri) Payet and Andre-Pierre Gignac, players who are all capable of making the difference.

"Some say that Dortmund and Napoli are our main rivals, but I would say they are at the same level."

Wenger, whose team lie just one point behind Liverpool at the top of the Premier League, is without a host of players due to injury for the game, including Santi Cazorla, Lukas Podolski, Alex Oxlade-Chamberlain and Mikel Arteta.

However, Mesut Ozil and Olivier Giroud have been passed fit to play after illness and a knee problem respectively.

Despite the presence of such talents in the English side, Marseille goalkeeper and captain Steve Mandanda insisted that he is not afraid and is just relishing being back in Europe's elite club competition.

"Why would we be scared? These are magnificent matches to play in and the reason why we play in the first place," said Mandanda, who is a survivor from the last meeting of the clubs here.