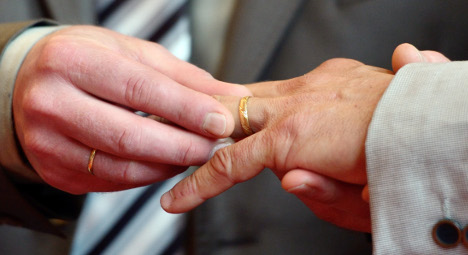 Not long after exchanging the rings a husband ended up in jail after punching his spouse. Photo: Denis Charlet/AFP

Most married couples dream of spending their wedding night together, but for two French newly-weds it didn’t quite work out as planned on Sunday. One man spent the night nursing a black eye while his attacker, none other than his new husband, spent the special night in a prison cell.

The two 22-year-old men from Alencon in Normandy, northern France, became embroiled in a dispute just hours after they had said "yes" and exchanged the rings in the local Town Hall.

As the row escalated into violence, one husband launched a fierce blow to the head of his new spouse that has resulted in them spending their first months of married life apart.

French newspaper Ouest-France reported that a court had taken a dim view of the violent dispute and sentenced the aggressor to 18 months behind bars on Monday.

The sentence was handed down despite him receiving the support of his husband who wanted the charges to be dropped.

The problem was it was not the man’s first offence. His previous convictions have ensured that it will be a while before the newly-weds see each other on the outside.

However the time spent in jail may be for the best and allow a much-needed cooling off period, before they can pick up where they left off in 18 months time.