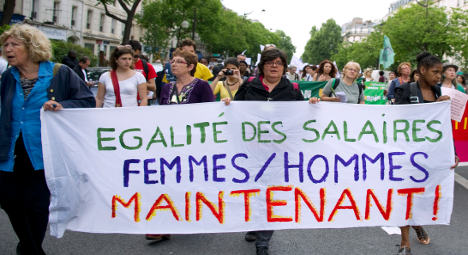 Protesters take to the streets in France to demand equal pay. Photo: AFP

France’s first ever Minister for Women’s Rights Najat Vallaud-Belkacem has set her sights high as she attempts to redress the balance between les femmes and les hommes.

Speaking as her "equality bill" was presented to the French Senate on Monday, Vallaud-Belkacem said set a deadline of 2025, they year by when she wants France to have achieved egalité.

Her legisaltion is an attempt to redress some of those persistent inequalities, in the sphere of pay, jobs and parental leave and is also aimed at tackling domestic violence.

“The deadline is clear, ambitious but realistic,” the minister said. “It is the time when the generation of pupils, who have just started school will enter the world of work, start a family and begin their adult lives, in which they will allocate roles for the man and the woman.

“It’s this generation of future citizens that this bill is geared too as well as all the steps taken by the government to improve equality between men and women,” said Vallaud-Belkacem.

On presenting her bill to the Senate she said: “We are not here to lead a battle between the sexes but we have a responsibility to accelerate the drive towards equality,” she said.

The key measure of the minister’s attempts to combat inequality is a reform aimed at encouraging more fathers in France to take parental leave.

From July 2014 parents with just one child, who are currently entitled to six months leave, will be permitted to take another six months as long as it is the second parent – normally the father – who takes the option.

For parents with two or more children the period of leave will remain three years but only on condition that six months of it are taken up by the second parent. If not then the legal period will be  cut down to two years and six months.

Currently in France, 97 percent of those parents who take parental leave are mothers. But the French government is hoping the number of fathers who take the leave, which currently stands at just 18,000 will jump to 100,000 by 2017.

Someone on parental leave in France currently receives a maximum allowance of €566 per month.

The question will remain over whether fathers, whose salary is often higher than that of their partners, will be attracted by the idea of giving up work to stay at home and look after their children.

Although polling agency Ifop report that the reform is welcomed by 89 percent of the French public, some associations have raised doubts.

The National Union of Family Associations (UNAF) believes the reality will see most families have their entitlements cut because fathers will remain reluctant to take up the option of parental leave.

UNAF cites a unwillingness and a fear among many fathers to risk their professional careers by taking parental leave, which would also see a major drop in household income.

The need to maintain employment in the current financial crisis is discouraging many fathers, UNAF says.

According to the figures from the National Observatory of Crime and Penal Solutions, a woman in France dies every three days from the result of domestic violence.

Reducing the rates of this kind of crime is high on Vallaud-Belkacem’s agenda. Her bill includes measures aimed at evicting a violent spouse from a couple’s home, making the attacker pay his own legal costs and “awareness training” to run alongside existing sentences for convicted spouses.

Perhaps the biggest job for Vallaud-Belkacem will be in the work place where she hopes to redress the imbalance in salaries between men and women.

France’s national statistics agency, INSEE, revealed earlier this year that women in France earn on average 18 percent less than men doing the same work in the public sector, and 28 percent less in the private sector.

In April this year the minister declared France had reached a landmark moment in the quest for equality when she announced that for the first time two French companies would be fined for paying female staff less than their male counterparts.

The firms are the first ever in France to be legally sanctioned for such a breach, despite the existence of legislation dating since 2010.

But Vallaud-Belkacem believes more legislation is necessary and in her bill has included a measure that would see companies, with more than 50 employees, which do not respect the regulations on gender equality, will be denied access to markets.

According to business organisation MEDEF, the measure would represent a double punishment as financial penalties already exist.