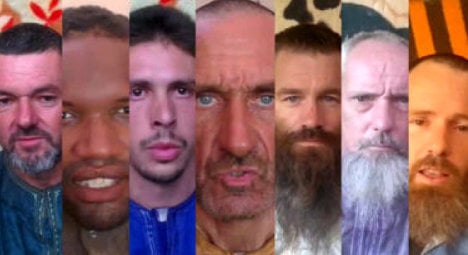 The seven hostages, including four French nationals who were kidnapped in Niger exactly three years ago. Photo:AFP

The hostages are four Frenchmen kidnapped from a uranium compound in northern Niger exactly three years ago along with a Dutchman, a Swede and a South African who were abducted from Timbuktu in northern Mali in November 2011.

"Based on an initial analysis, the video seems credible to us and provides new proof of life of the four French hostages kidnapped in Arlit (northern Niger) on September 16, 2010," foreign ministry spokesman Philippe Lalliot said, adding that the footage was being authenticated.

In the video, released to the Mauritanian news agency ANI, Frenchman Daniel Larribe introduces himself as the head of the French group and says he was kidnapped by Al-Qaeda in the Islamic Maghreb (AQIM).

ANI reported on its website that he was speaking on June 27 and said he was in good health.

"Of course we react positively every time we see that they are alive and in relatively good health," said Legrand's grandfather Rene Robert.

Philippe Verdon, who was kidnapped in Mali in 2011 and found dead earlier this year, was executed with a shot to the head, according to French prosecutors.

Daniel's wife Francoise Larribe was also captured but was released in 2011.

A fifth French hostage, Serge Lazarevic, was kidnapped along with Verdon in the night of November 24, 2011 at their hotel in Hombori.

Their families have insisted they were not mercenaries or secret service agents.

French President Francois Hollande said in July that France was "doing everything" to bring the hostages back but "will not talk so as not to complicate a situation which is bad enough".

In the video the French hostages reportedly urge Hollande's administration as well as family members to work for their release.

"I am in good health," Larribe was quoted as saying by ANI in a brief statement that also referenced France's intervention in Mali earlier this year.

France sent troops into its former colony Mali in January to repel a sweeping Islamist occupation by groups linked to Al-Qaeda including AQIM which was threatening an assault on the capital Bamako.

AQIM grew out of a movement launched in the late 1990s by radical Algerian Islamists who sought the overthrow of the Algerian government to be replaced with Islamic rule.

The organisation linked to Al-Qaeda in 2006 and has spun a tight network across tribes, clans, family and business lines that stretches across the vast Sahel region abutting the southern Sahara desert.

During the nearly year-long 2012 occupation of northern Mali – which borders Mauritania – AQIM and its allies Ansar Dine (Defenders of Faith) and the Movement for Oneness and Jihad in West Africa (MUJAO) used ANI as a conduit for information.

Threats to retaliate against the French-led military intervention which ousted the Islamists have also filtered through ANI and other sites boasting a vast network of informants and correspondents in the Sahel region.