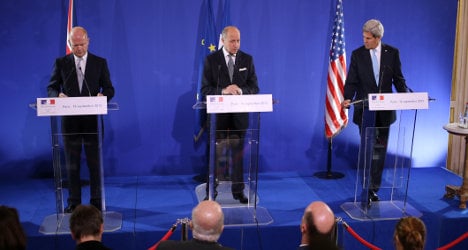 Britain, France and the United States on Monday agreed to step up their backing for rebels fighting Syrian President Bashar al-Assad.

The three powers also agreed at talks in Paris that Assad would face "serious consequences" if he fails to comply with a UN resolution setting out a timetable for the handover of Syria's chemical weapons to international control, French Foreign Minister Laurent Fabius said.

US Secretary of State John Kerry did not use the word "serious", saying: "If Assad fails to comply with the framework we are all agreed that there will be consequences."

Kerry, who agreed the terms of the weapons handover with his Russian counterpart in Geneva on Saturday, said the allies were committed to keeping up the pressure on Assad.

"If the Assad regime believes that this is not enforceable and we are not serious, they will play games."

Fabius announced there would be a major international meeting with leaders of the Syrian National Coalition on the sidelines of the UN General Assembly in New York next week.

"We know that in order to negotiate a political solution, there has to be a strong opposition," Fabius said.

French officials said Russia had been invited to the conference.

Kerry also stressed that the allies were "committed to the opposition" and said Assad had "lost all legitimacy to be possible to govern his country."

The signal of support for the rebels came in reaction to criticism of the chemical weapons deal from opposition leaders, who fear it could consolidate Assad's grip on power.