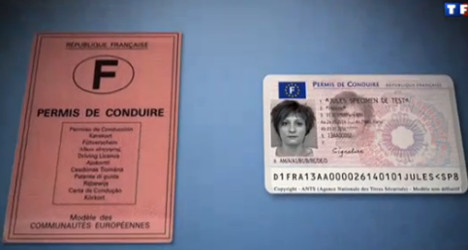 France has finally caught up with the rest of Europe it seems, well when it comes to the style of its driving licences anyway.

From Monday anyone passing their driving test will be given a new card licensee, like the ones already used in much of Europe, instead of France's old-school “pink-paper” (papier rose) permits.

The move, is not just so the credit card sized licences can fit nice and comfortably into drivers’ wallets or purses, but it is more aimed at trying to tackle the curse of counterfeit permits which has plagued authorities.

It has been reported that as many as ten percent of licenses in circulation in France are counterfeits.

In a bid to reduce that figure the new cards will contain a microchip and an MRZ (Machine readable Zone) swipe band.

According to the spokesman for the Ministry of the Interior, Pierre-Henry Brandet the “Pink paper” permit was the “most falsified” and indeed “most easily falsified” document.

Christophe Naudin, a specialist in identity fraud welcomed the new licenses but added a word of warning.

“The good news is that all the electronic documents that contain a chip, are much harder to falsify. There is an extra level of security,” he told French radio RTL.

But the professor from the University of Paris II added: “Nothing is impossible to falsify. There won’t be false permits appearing right away, but we’ll need to wait a few years. I don’t know any document that is impossible to forge.”

The French have been told not to panic and all rush at once to demand a new card license from prefectures. And some license holders may have a few years to wait before getting their hands on the new style permit.

The “pink paper” licenses are to be fazed out over time and those who already have one will be sent a new card style license in the post.

Apart from those drivers passing their test for the first time, only licenses issued between January 19, 2013 and September 16, 2013 will be exchanged for new ones in 2014.

However the other other 38 million license holders will have to wait a good while longer. They will be issued new licenses between 2015 and January 19, 2033 when the paper ones finally expire.

Holders of the new licenses will be be given a pin code so they can check on line how may points they have picked up.

The new licenses were introduced in the EU in January 2013, but their roll-out was delayed in France due to computer problems, TF1 reports.

Foreign drivers wishing to switch to a French permit will also be issued with the new card license.