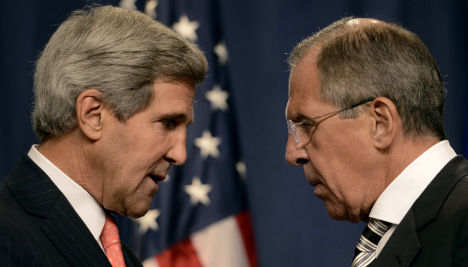 "The plan is a significant step forward," Foreign Minister Laurent Fabius said in a statement, after his Russian and US counterparts reached a deal in Geneva.

Fabius, whose country has been Washington's main support in advocating military action against Damascus, added that he was awaiting further information from UN inspectors.

"France will take the report to be published Monday by the UN inspectors on the Damascus massacre into account before formulating a definitive stance," he said.

The UN team which conducted an investigation into the alleged August 21st chemical attack that sparked an international outcry is to release its findings on Monday.

Russia, which has been Damascus' main support and has systematically blocked Western initiatives at the UN Security Council, reached a deal with Washington Saturday to destroy Syria's chemical arsenal.

Fabius, US Secretary of State John Kerry and British Foreign Secretary William Hague are expected to meet in Paris on Monday to discuss the details of the deal's implementation.

The plan outlined by Kerry in Geneva provides for the removal and destruction of Syria's vast chemical arsenal by mid-2014.

Kerry's Russian counterpart Sergei Lavrov said at a press conference wrapping up the three days of talks in Switzerland that the UN Security Council would take action if Damascus failed to meet its international obligations on chemical weapons.