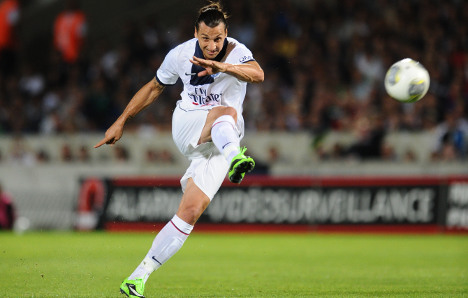 The champions are assured of occupying top spot for at least a further 24 hours, with Marseille visiting bottom club Toulouse on Saturday night.

But the biggest threat to the defence of their crown comes from fellow-big spenders Monaco, who entertain Lorient on Sunday and should logically leapfrog the Parisians.

PSG, who have an important midweek date with Greek side Olympiacos in the Champions League coming up, were always in control of the game and their fluid football meant the result was never in doubt.

But they still had to wait until half-an-hour in to breach the Bordeaux defence for the first time, when Blaise Matuidi collected a deft through ball from Zlatan Ibrahimovic to beat Bordeaux goalkeeper Cedric Carrasso.

Yet it was all but over in the 64th minute when the impressive Lucas doubled the score with his first goal for the club, beating the offisde trap to a through ball from Verratti and leaving Carrasso stranded waiting for the cutback for the lurking Ibrahimovic.

"I needed that goal, not only to prove to the others what I'm capable of but also for myself," Lucas said.

The hapless Carrasso conceded that Bordeaux were always second best on the night.

"We ran into a serious Paris side, who gave themselves the ideal preparation for their first Champions League game. We tried to play at our best, but we were up against some great players and the second half they were much better than we were."