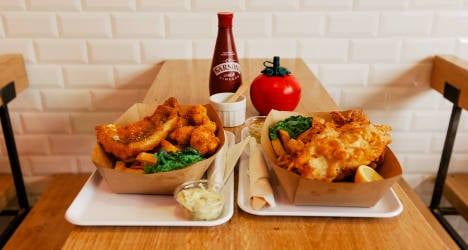 Paris has a new restaurant but can fish and chips survive in a world dominated by confit de canard, agneau souris and entrecote? Photo: The Sunken Chip.

Paris has a new addition to its restaurant scene but you won’t find confit de canard, entrecôte or agneau souris anywhere on the menu.

What you will find however is good old British fish and chips.

Le Sunken Chip, in Paris’s 10th arrondissement, has already been making a stir in Paris with France's Glamour magazine recently featuring it at number 3 in the "hottest places to go" this September.

Michael Greenwold, 29 co-manager of the restaurant , along with James Whelan, 27, tells The Local why he is confident they can convince the French, notoriously proud of their own traditional cuisine, about the joys of battered fish and chunky chips. And also he won't be having wine anywhere near his restaurant.

(Michael Greenwold, cooking up a treat at Le Sunken Chip)

Opening a fish and chip restaurant in Paris! Where did that idea come from?

Well, I already run another restaurant in Paris, which does traditional French cuisine and although it is successful, I always wanted to do something with fish and chips. Being British it was close to my heart. We researched the possibility for a long time and felt the time was right. It's still seen as being quite cool to be British at the moment.

But it’s Paris, home of the brasserie!

Yeah, we were worried at first about how we would be received by French people. We obviously get a lot of expats coming in but 70 percent of our customers are French. So if we can make trendy Parisians eat fish and chips then we must be doing well. There is a massive movement in Paris in the last few years away from the failing Parisian brasserie, especially among office workers. Sushi became popular but people became sick of it, now it is burgers etc and I think fish and chips can fit into that.

It must have been nerve-wracking?

We were confident in the product we were selling and we knew what we wanted to do. We went to London to do some research and we were actually disappointed by the quality of fish and chips the restaurants were selling over there. We thought if they are selling this in London we can do much better in Paris.

Is it a real chippy or is it just a brasserie that sells poisson et frites?

We haven’t done a fish and chip restaurant for French people. If we were opening this place in London it would be exactly the same. We do source our fish from Finistere in Brittany so they come from the Channel and for the chips we use the same variety of potato you would get in Britain. We have the best sauces and sell all the classic British drinks like Cream Soda and Iron Bru. We will soon be selling bottles of London Pride ale too. At the beginning we had a few French customers asking for a dessert. We thought about it but in the end we decided if they want one they can go down the road to the patisserie.

And will the French be introduced to mushy peas?

No the mushy peas are out. We are doing peas with the fish and chips but the are not mushy. They are classic petites pois with a bit of olive oil, salt and mint. And we have had to do monkish cheeks instead of scampi. Everything that comes out of the kitchen is homemade.

And are the fish and chips are served in Le Monde or another newspaper?

No, unfortunately not. Because of an EU law it is now illegal to serve them in newspaper unless the ink is edible. They are wrapped in traditional grease-proof paper though.

How is the famous French red tape when it comes to opening a restaurant?

Well it was a bit of nightmare. It was worse for the first restaurant we opened. We were aged 23 and 28 at the time and no one wanted to give us any credit. We were too young, but luckily eventually one bank said yes. With the Le Sunken Chip we got a bit lucky and managed to get the premises through a blind auction. It was pretty nerve-wracking. You just turn up with a banker's cheque and hope it's enough.

You have also brought two French investors on board. Any cultural differences that have caused friction?

One of them had never even eaten fish and chips before and the other one came to London with us to do the research and was aghast. He was saying: “Do you really eat this stuff.” It has been difficult at times. They were conscious of what a restaurant should be like in France so we had a big dispute at one over whether to serve wine or not. We insisted there’s no way we can serve wine in a chippy. We will sell beer and maybe cider. So, there were a few cultural differences yeah, but in the end they left the concept to us.

And are the Parisians flocking in for some fish?

It’s going really well. We have even had offers of investment and we aim to expand and open one or two more around Paris. My real dream is to set something up on the coast in France. There are so many sea side towns in France so the potential is there and the Brits get everywhere so I think it could work.