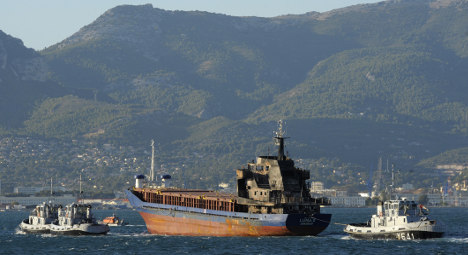 The Luna-S ship which was intercepted with a record €50 million worth of cannabis on board. Photo: Franck Pennant

The French navy said on Thursday it had made a record cannabis seizure in the Mediterranean sea after intercepting a ship carrying 20 tonnes of cannabis worth up to 50 million euros.

"To the best of our knowledge it is the biggest seizure by the French state in the Mediterranean," vice-admiral Yves Joly told a news conference in Toulon.

The market value of the cannabis was "between €40 and €50 million ($53 and 66 million)," said regional customs head Hugues-Lionel Galy.

The Luna-S, a Tanzania-flagged vessel, was intercepted by the French navy on Sunday in international waters between Sardinia in Italy and Algeria.

The eight-member crew, who claimed to be Syrians, set the cannabis on fire and a part of the clandestine cargo was destroyed before the ship was towed by a French vessel and arrived in the southern port city of Toulon on Thursday.

The men will be tried in France and could face up to 10 years in prison, if convicted.

Tanzania had authorised French authorities to stop and inspect the ship and try the suspects. The Luna-S left Morocco and appeared headed for Egypt.

In another apparent victory in the fight against the drug trade French police arrested 11 suspected criminals involved in trafficking arms and drugs and Marseille and Corsica, according to reports on Thursday.

The eleven were members of gangs and were known to police and were detained in raids this week in Marseille and Corsica.

Police seized around €80,000 in cash, several arms and a kilo of cocaine in the raids.

The French government has been under pressure to do more to fight the drug trade, which has seen 15 people shot dead in Marseille this year.

There have been calls to send the army into the city, which were angrily rejected by poice unions on Thursday.