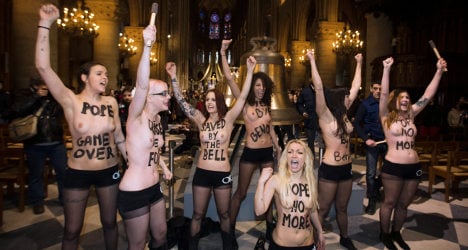 The members of the radical feminist group Femen, during their demonstration at Notre Dame cathedral in Paris in Febuary. They face charges of "desecration." Photo: Joel Saget/AFP

The members of Femen, which started in Ukraine but is now based in Paris, face charges of “desecration of a place of worship” and "desecration of sacred objects.”

The women entered the Gothic cathedral on February 12th, dressed in long coats which they whipped off inside while ringing three bells near the altar.

"Pope no more!" they cried. "No more homophobe" and "Bye bye Benedict!"

The protesters were dragged out of the cathedral by security guards but remained outside for some time shouting "In gay we trust" and "Get out homophobe."

Authorities at the Paris landmark were dismayed by the behaviour of the women.

“They mounted the podium where three of our new bells were being displayed for the 850th anniversary of the cathedral,” Jacquin told Metro France at the time.

“They damaged the bell called Denis, knocking off its gold leaf.”

“This unspeakable raid was incredibly violent and the children who were there at the time were left in shock,” Jacquin said.

Femen's Ukraine-born leader, Inna Shevchenko, however, has denied members of the group did damage to any bells, and denounced the accusations as "nothing more than another way in which the Church can try to punish blasphemy."

In May, one member forced the evacuation of the tourist attraction by staging a theatrical mock suicide on the altar, a day after far-right historian Dominique Venner shot and killed himself in the church.

Here is a video of the event, which features partial nudity and simulated suicide in a place of worship, and may offend some readers.

Femen has been making headlines since 2010 for topless feminist, pro-democracy and anti-corruption protests in Russia, Ukraine and London.

After celebrating the departure of the pope, the activists were caught on video targeting French President François Hollande on his arrival at the Paris air show in June.

Despite that, however, the group’s leader, Inna Schevchenko was granted political asylum in France in July.

The 23-year-old said she feared persecution in her native Ukraine after she sawed down a large wooden cross that stood in the centre of Kiev.

Last year, members of the group dressed up as nuns to try to sabotage an anti-gay marriage protest in Paris.

The women ripped off their 'habits' to reveal comments scrawled on their naked chests such as "In gay we trust" and "Fuck the church".

Catholic group Civitas then sued the group for “sexual exhibitionism” in front of children, as well as protesting illegally and insulting a religious group by mocking their appearance.

Below is a video of Femen’s “celebration” at Notre Dame cathedral after the resignation of Pope Benedict. It contains partial nudity in a place of worship that some readers may find offensive.