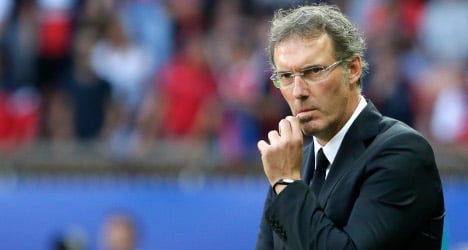 The French capital club travel to Greece to face Olympiacos in Europe next Tuesday, but the clash with Bordeaux is the first of a hectic run of seven games in 23 days which will also see them face Monaco, Benfica and Marseille.

PSG are yet to lose this season, but draws in their opening two Ligue 1 games were followed by not entirely convincing wins against promoted duo Nantes and Guingamp just before the international break.

However, they have already had the measure of Bordeaux, beating the French Cup holders 2-1 in the Champions Trophy at the beginning of last month.

It will be a special occasion for Blanc, whose three years in charge at the Stade Chaban-Delmas were highly successful, with Bordeaux winning the title, the League Cup and the Champions Trophy in 2009 before reaching the last eight of the Champions League a year later.

Now in the away dugout, he must improve PSG's rather poor record in the Gironde, where they have won just seven times in 39 previous visits.

"I had three great years there and only have happy memories. It is a pleasure to go back."

On Friday, Blanc will again be without Jeremy Menez, who is suffering from kidney stones, and must decide whether his returning international stars, such as Sweden's Zlatan Ibrahimovic, France's Blaise Matuidi, Brazil's Thiago Silva and Uruguay's Edinson Cavani, are in condition to play.

Another of his internationals, Argentina's Ezequiel Lavezzi, has not been named in the squad.

"With this run of seven matches in 23 days, we are obliged to rotate the squad," Blanc admitted.

"That is why we have the squad we do. We need to look at the physical condition of all those who have been on international duty, because some had still not come back by Thursday afternoon. Cavani will only return on Friday."

France's other representatives in the Champions League group stage are Marseille, who travel to bottom club Toulouse on Saturday.

Before hosting Arsenal in Europe next Wednesday, OM will be looking to get back to winning ways domestically after a 2-1 home loss to Monaco in their last outing.

Since that game, coach Elie Baup has seen France under-20 World Cup-winning duo Florian Thauvin and Mario Lemina arrive from Lille and Lorient respectively, and Baup has confirmed that Thauvin will feature with Andre Ayew suspended.

The early pacesetters are Claudio Ranieri's Monaco, who have no European commitments to worry about and who entertain Lorient at the Stade Louis II on Sunday before travelling to face PSG.

The principality club should be able to call on Radamel Falcao, who suffered an ankle injury in the win at Marseille but played in Colombia's 2-0 defeat in Uruguay in World Cup qualifying in midweek, while France midfielder Geoffrey Kondogbia could make his debut after his recent arrival from Sevilla.

Meanwhile, Lyon entertain Rennes at the Stade de Gerland aiming to halt an alarming run of four successive defeats in all competitions.

However, OL fans will be hoping Bafetimbi Gomis features for the first time this season after returning to training following a summer-long dispute with the club.

"I am like a new signing, perhaps by default," said Gomis last week. "I will try to integrate myself as quickly as possible into my new team. I am just pleased to be back on the pitch."

Among the other games, Saint-Etienne travel to Valenciennes without injured Brazilian striker Brandao, while Nice coach Claude Puel will take his current side to face his old club Lille.

Fixtures (kick-offs 1800 GMT unless stated, France is two hours ahead of GMT)