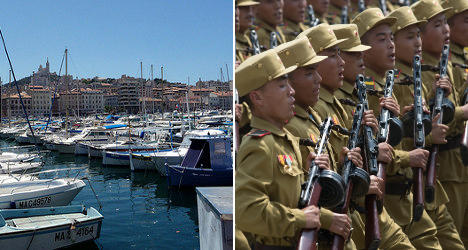 "Marseille is not Pyongyang", a police representative tells the The Local as a survey reveals the French want the army sent in to deal with the crime. Photo: Ed Jones/AFP

Nearly six out of 10 French voters are in favour of sending the army into Marseille to combat rampant gun crime in the southern port, a poll published on Thursday found.

Some 57 percent of those surveyed backed the proposal, first floated last year by a local politician, according to the YouGov poll published by the Huffington Post website.

Only 25 percent of respondents opposed deploying the army and 76 percent took the view that a recent spate of drugs-related killings marked a "lasting deterioration" of the situation in the city, the poll found.

The idea of deploying troops in Marseille was dismissed last year by government ministers, but a leading member of the ruling Socialist Party (PS) on Thursday suggested it should be considered.

"Why not?" said Ségolène Royal, a former PS presidential candidate and the ex-partner of President François Hollande.

"This poll is an expression of the exasperation felt by many French people, the feeling that you have gangsters running around using weapons of war.

"Marseille is not at war but given the proliferation of these weapons, why not envisage cooperation between the police and the army to seize and destroy them?"

However, the country's second biggest police union Alliance reacted angrily to Royal's words and stressed that soldiers had no place on the streets of a French city.

"Marseille is not Pyongyang in North Korea," Alliance's David Olivier Reverdy told The Local on Thursday. "What kind of model of society do these people want?

"The army is trained to kill in the context of a war, they are not trained to deal with disorder on France's streets. They work under different laws than the French police.

"The police are quite capable of restoring order in Marseille, but there needs to be will power from politicians and they need to be given the necessary means.

"Politicians use phrases like 'war' to describe the crime in Marseille but they don't follow it up with actions."

Two fatal shootings last week took the number of people killed in gang-related violence in Marseille this year to 15, and to 39 since the start of 2012.

One of the latest victims was the son of José Anigo, a former coach and the current sporting director of the city's football club, Olympique Marseille.

Adrien Anigo was shot through the head by assailants riding a high-cylinder motorcycle. His slaying briefly sent Marseille's problems back to the top of the national political agenda.

Police say most of the murders in Marseille are linked to turf wars between multiple rival gangs battling for control of the drugs trade in the city's poorest neighbourhoods.

The violence, they say, is aggravated by the easy availability of high-calibre weapons, with the street price of a Kalashnikov automatic rifle – the murder instrument of choice – reported to be as little as €500 ($665).

"The police in Marseille need reinforcements. They need resources and they need more means and material," Reverdy said. "You look at New York. They did not send the army in there when there was a problem with crime. They gave the police the means the deal with the problem and it worked."

Reverdy also slammed the Socialist government's penal reforms, which plan to look at alternative punishments to prison, like probation, and would see many convicted criminals released early.

These measures will simply lead to more crime in places like Marseille, he said.

"How can you have all this talk about being tough on crime in Marseille and then on the other hand talk about releasing prisoners early?

"These reforms will make it worse for everyone – for the public and especially for the victims of crime."