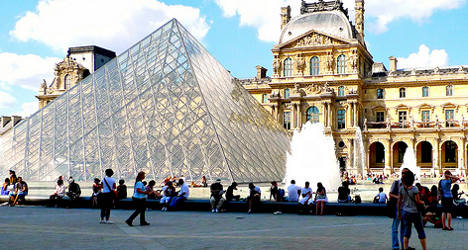 The Louvre in Paris, victim of a fake ticket scam in China. Photo: Zoetnet/flickr

French police are investigating an apparent scam involving fake tickets for the Louvre museum in Paris after top-quality counterfeits were found in the hands of Chinese tourists, museum and judicial officials said Wednesday.

The probe was launched after agents found false tickets being used on several occasions last month by Chinese tourists and tour guides, a source at the Louvre – one of the world's largest and most-visited museums – told AFP.

At first the tickets were of poor quality, but then some seized on August 14 were found to be of "very good quality, perfect clones of our tickets", the source said.

The museum filed a criminal complaint on August 15.

"We uncovered several more fake tickets in the following days, but we have not intercepted any since August 26," the source said. "We are being very watchful because these tickets are valid for a year."

A judicial official said police had questioned several tour guides in connection with the case but that no charges had been laid.

The source said that around the same time the tickets were discovered, Belgian customs officials alerted French authorities that they had seized about 3,600 counterfeit tickets for the Louvre hidden in a package sent from China.

The Louvre – home to the Mona Lisa, the Venus de Milo and other famed artworks – is one of Paris's most-frequented sites, with about nine million visitors a year.

In April, the museum was forced to close for a day after workers staged a walkout to protest what staff said were increasingly aggressive gangs of pickpockets targeting the site.