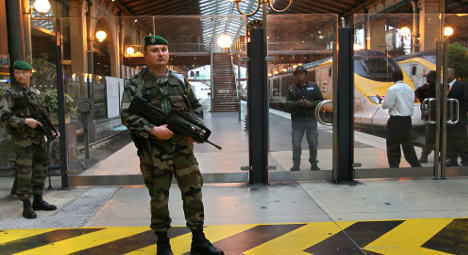 File photo of Eurostar platform at Gare du Nord. Photo: Thomas Coex/AFP
A large section of Gare du Nord train station in Paris was evacuated on Thursday after a passenger was caught trying to board a Eurostar to London with a military shell, according to reports.
Parts of the station, which is France and Europe’s busiest, were evacuated between 11am and 12pm, after Eurostar staff detected the shell as the passenger went through a security check.
According to one traveller the evacuation of the station sparked "chaos" with hundreds of passengers forced out on to the streets around the Gare du Nord.

It is not yet known whether the device was live, but after its discovery, the ‘Grandes Lignes’ section of Gare du Nord was evacuated for around an hour.
National rail operator SNCF attempted to play down the incident.
“As happens from time to time, a passenger tried to board the Eurostar with a shell in his luggage,” SNCF spokesman Antoine Debièvre was quoted as saying by French daily Le Parisien.
“But obviously, after [the luggage] passed through the metal detector, that didn’t happen,” he added.
A spokesperson for Eurostar told The Local that “there was no risk to the public at any time.”
The scene of hundreds of passengers gathered outside the station in the middle ofthe day is one not many commuters had witnessed before.
"Strike, No! Protest? No! Suspect package? Yes! I have never seen the station closed at this time," tweeted one passenger caught up in the chaos.

Thursday’s incident took place in a climate of increased fears after Al Qaeda threatened in August to launch an attack on Europe’s rail network.

Le Parisien reports that in June 2010 a pair of tourists similarly tried to board a Eurostar at Gare du Nord with an active, if 200-year-old shell they had bought as a souvenir on their trip to France.