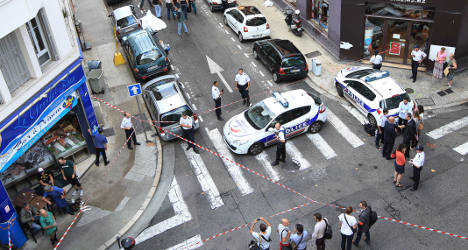 Police and bystanders survey the scene in the Notre Dame neighbourhood of Nice, where a jewellery store owner allegedly shot dead a man who had just robbed him. Photo JC Magnenet/AFP

Morning commuters on rue d’Angleterre in Nice witnessed a dramatic sequence of events on Wednesday around 9am.

After reportedly being robbed at gunpoint by two men, the owner of a local jewellery shop is alleged to have shot at the thieves as they fled on a scooter, killing one of them.

According to French daily Le Parisien, two men held the owner of La Turqoise, 23 rue de l’Angleterre, at gunpoint some minutes before he was due to open for the day, and forced him to empty a safe.

After fleeing on foot, the men were pursued on to an adjacent street by the jeweller.

The latter then used a 7.65 automatic pistol to shoot at them as they mounted a scooter, according to local daily Nice Matin.

The back passenger was hit and fell off the vehicle while his accomplice sped away. After a few minutes of heart massage on rue d’Italie, the man aged in his 20s was pronounced dead.

Eyewitnesses reported hearing three or four shots. “I thought it was firecrackers,” one told Le Parisien.

Police cordoned off the area surrounding the deceased man, and the jewellery shop owner has been arrested on suspicion of voluntary homicide.

The culprits were later found and brought to justice.

Wednesday’s is far from the first jewellery heist to hit the Côte d’Azur in recent months.

In July, The Local reported the record theft of €103 million ($137 m) worth of jewellery from an establishment in the southern city of Cannes.

And in May, daring thieves robbed €1 million ($1.33 m) worth of jewellery that had been due to be loaned to the world’s biggest film stars at the Cannes Film Festival.

Elsewhere in France, thieves ram-raided an upscale Paris jewellery store just two days ago, making off with €2 million ($2.7 m) worth of loot.