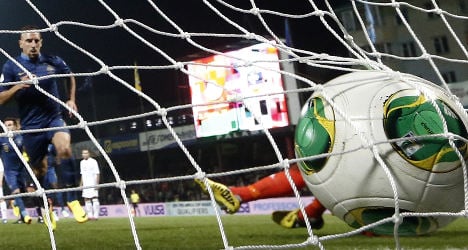 Franck Ribery scores a penalty for France against Belarus on Tuesday. Photo:Franck Fife/AFP

Franck Ribery netted a brace as France twice came from behind to win Tuesday's World Cup qualifier in Belarus 4-2, ending a run of five games without a goal for Didier Deschamps's side.

Despite setting a new national record for the longest goalscoring drought, France came alive in the second half to record their first win in six matches and draw level with Spain at the top of Group I, albeit having played a game more than the world champions.

A mistake from France goalkeeper Hugo Lloris had seen Egor Filipenko head Belarus in front on 32 minutes before Ribery responded with a penalty just after half-time.

More poor goalkeeping from Lloris allowed the hosts to move back in front through Timofei Kalachev, but a second Ribery strike plus goals from Samir Nasri and Paul Pogba steered France to a much-needed victory.

"We are very happy to have had a second half as good as that and to have scored four goals because it has been a long time since we scored," said Ribery, who had been an injury concern prior to the game.

"Patrice Evra gave a good speech in the dressing room, a man's speech. He said we had to play, to relax. We have great respect for Belarus but we are the France team all the same.

"We showed character, we were united. If we wanted to finish second, we needed a big second half. We weren't scared but it's true we equalised and then conceded the second goal very quickly after.

"After my second goal, I was very happy that Samir (Nasri) came on and had such an impact," added Ribery.

France moved onto 14 points from seven matches, level with Spain, who were not in qualifying action on Tuesday, as Les Bleus guaranteed themselves second-place in the group and a potential play-off berth.

Deschamps opted to axe beleaguered striker Karim Benzema from France's starting line-up, deploying Arsenal's Olivier Giroud as the lone man up front, with Benzema finally paying the price for a dreadful run of form that had seen him go 1,217 minutes without a goal for his country.

Gael Clichy replaced Evra at left-back, while Paul Pogba and Blaise Matuidi were recalled after suspension to anchor the French midfield as Deschamps made four changes to the side that drew 0-0 in Georgia on Friday.

Sergei Balanovich almost gave the hosts a dream start, flashing a shot narrowly wide of the far post from an acute angle after shrugging off a challenge from Eric Abidal.

Laurent Koscielny then saw a close-range effort deflected onto the roof of the net after Belarus struggled to clear a corner.

France broke the previous national record for consecutive minutes played without a goal by surpassing the 500-minute mark midway through the opening period.

The visitors then found themselves behind just after the half-hour as Lloris allowed a tame Filipenko header to slip through his fingers.

However, Ribery hauled France level two minutes into the second half as he coolly converted a penalty after being brought down in the box by Belarus goalkeeper Sergei Veremko.

The goal was France's first since a 3-1 win against Georgia at the Stade de France back in March, ending a run of 526 minutes without finding the net.

However, Belarus went in front for a second time on 57 minutes as Lloris's miserable evening continued when he let Kalachev's 25-yard strike sneak in at his near post.

The home side's lead didn't last for long, though, as Ribery ghosted in at the far post to turn in Mathieu Valbuena's teasing cross for his second of the night.

Nasri, who came on for Dimitri Payet, then completed the turnaround as he squeezed a shot beyond Veremko from just outside the area on 70 minutes before Pogba capped the comeback shortly after, stabbing home at the back post after a mix-up in the Belarus defence.