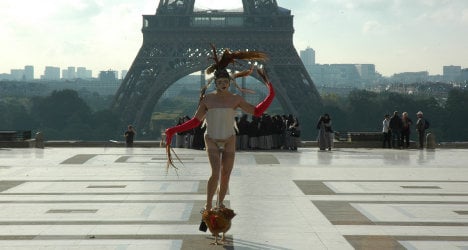 South African artist Steven Cohen performing with a cockerel attached to his penis by a ribbon at Trocadero in Paris on September 10th, before his arrest. Photo: Quentin Evrard

Millions of wide-eyed tourists visit the Eiffel Tower every year, but on Tuesday morning a handful of them were treated, depending on your viewpoint, to a highly unusual spectacle.

At around 9.30 am, South African artist Steven Cohen emerged from a car and joined the crowds at Place du Trocadero, under the shadow of the world-famous monument, for a spot of breakfast-time performance art.

But what ensued wasn’t the break-dancing or portrait-painting typical of Parisian tourist landmarks.

Dressed in a bird outfit, and shuffling over to a prominent spot on the public square, Cohen began dancing about, with no less than a cock tied to his penis with a long ribbon.

In high-heeled platform shoes and wearing a corset, thigh-length tights, and long red gloves, and with long, wild feathers emanating from his head and hands, Cohen began “walking” the chicken up and down before crowds of tourists.

“He danced with the cock for around ten minutes, before being arrested by the police,” his lawyer Agnes Tricoire told French daily Le Parisien.

Perhaps inevitably, Cohen was held by Paris police on charges of indecent exposure, before being released later in the day.

His lawyer expressed her disgust with the duration of his arrest, telling Le Parisien: “It’s a disgrace. With this performance, Steven Cohen wanted to evoke his situation, split between two countries.”

“South Africa, his native land, and France, where he lives at the moment,” she explained. “France is throwing artists in prison,” she added.

While Cohen was released from questioning on Tuesday evening, he is due to appear in court on December 16th.

Cohen was born in South Africa in 1962, according to the Stevenson agency’s website, but currently lives in Lille, in northern France.

“He is a performance artist who stages interventions in the public realm and in gallery/theatre spaces. His work invariably draws attention to that which is marginalised in society, starting with his own identity as a gay, Jewish man,” the South African agency says.

His performance art piece “Sphincterography: The Tour – Johannesburg (The Politics of an Arsehole)” has been included in this year’s Festival d’Automne at La Maison Rouge in Paris.