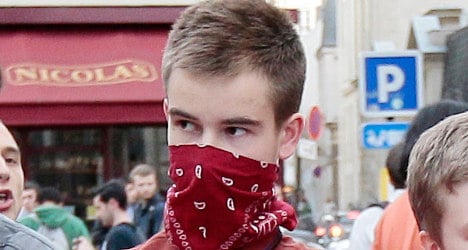 18-year-old activist and student Clément Méric, marching in support of gay marriage in Paris in April 2013. He was killed after a brawl on June 5th. Photo: Jacques Demarthon/AFP

Samuel Dufour, a 19-year-old far-right extremist, has been charged with violence leading to the death of Méric, but without the intention of killing him, according to judicial sources quoted by French radio RTL on Tuesday.

Investigators had previously suspected Esteban Morillo, another far-right extremist, of being solely responsible for landing the fatal blow on Méric during the brawl at Rue Caumartin on June 5th.

However, further examination of Méric’s autopsy report led them to conclude that a pattern of blows to the 18-year-old anti-fascist activist’s nose and cheeks implied the involvement of a second party.

RTL reports that rings worn by Dufour during the fight had matched imprints on Méric’s face.

Méric was officially pronounced deceased on June 6th, a day after being left brain dead during a fight with far-right skinheads near Gare Saint-Lazare in the capital’s 9th arrondissement.

His death sent shockwaves throughout France, and drew condemnation from all sides of the political spectrum.

In the ensuing weeks, France’s Socialist government banned four far-right extremist groups, two of which had ties to those implicated in the death of Méric.

On Monday, Esteban Morillo made the surprise move of changing defense lawyers and distancing himself from far-right groups who had planned a demonstration in his support on September 14th.

“Esteban Morillo wishes to defend himself alone, on the basis of the facts, and only the facts,” his new lawyer was quoted as saying by French daily Le Nouvel Observateur.

“He does not want to become the flag-bearer for groups which have emerged during this affair.”