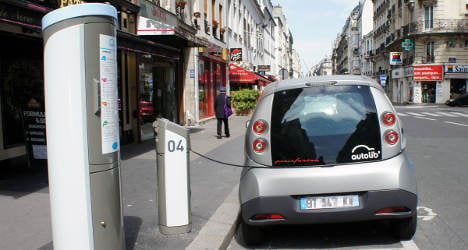 A car at an Autolib recharging station in Paris. The company that runs the electric car service has charged German auto giant BMW with industrial espionnage. Photo: Mariordo59/Flickr

Another Franco-German automobile row appears to have kicked off this week.

As the dust-up between Mercedes and the French government rumbles on, the company behind the ground-breaking Paris car-sharing scheme Autolib has now accused BMW of "spying"

The affair began on August 21st, when Autolib maintenance staff, or "ambassadors" as they are called, spotted two men they said were German, at a recharging station in Paris, fiddling with computer equipment in one of the electric vehicles, called "Blue cars".

Later that day, the same men reportedly passed themselves off as “maintenance staff” and pretended to carry out work on one of the cars in the city’s 9th arrondissement, before slipping away.

Their suspicions raised, one of the Autolib ambassadors made a note of the license plate of one of the cars rented by the German men, cross-referenced it with rental times, and discovered that a “P3-group.com” email suffix was used to sign up online for the Autolib scheme.

P3 is an engineering firm contracted by none other than BMW to lay the groundwork for its upcoming I3 electric car model.

The following day, the alleged spies were once again seen at an Autolib station, this time in the city’s second arrondissement.

According to reports in French daily Le Figaro, when questioned by staff, the two men said they worked for BMW, before quickly leaving the scene.

This time, management at Autolib, which is run by French company Bolloré, notified the DCRI, France’s intelligence services, and told all its staff to be on the look-out for phoney "maintenance staff".

They were not seen again until September 5th, when they were spotted on Rue Jouffroy-d’Abbans in the seventh arrondissement.

Staff immediately called in the police, who came and arrested the two suspects.

The pair were qustioned by BEFTI, the police’s electronic fraud division, before being released the next day.

Autolib management promptly filed a police complaint, accusing the two men of “abuse of trust,” “intrusion into a system of automated data,” and property damage, according to Le Figaro.

BMW reportedly took the step of writing to Bolloré's CEO, Vincent Bolloré, reportedly recognizing it had dispatched staff to conduct “compatibility tests,” and apologizing for not seeking advanced permission from Bolloré.

However, in a statement released on Tuesday, BMW France denied all allegations of industrial espionage.

"In the context of the upcoming launch of the BMW I3, BMW Group is conducting routine tests across Europe, to check the compatibility of charging stations on public streets," said the statement.

"The sole purpose of these tests is to identify networks of charging stations that electric BMW vehicles could use."

The company confirmed it had conducted tests of this kind on August 21st, 22nd and 26th in Paris, but significantly denied it had done so on September 5th, the day the two alleged spies were arrested.

A representative from the P3 Group was not immediately available for comment when contacted by The Local on Tuesday.

Users can rent and return one of the more than 4,000 Bluecars for as little as €9 for half an hour, or as much as €120 for an annual subscription of unlimited journeys of up to 30 minutes.

Since launching in Paris, the scheme has come to the eastern city of Lyon, and is slated to arrive in Bordeaux, south-western France in November.

After that, plans are afoot to bring the all-electric car-sharing scheme to the US city of Indianapolis in 2014.