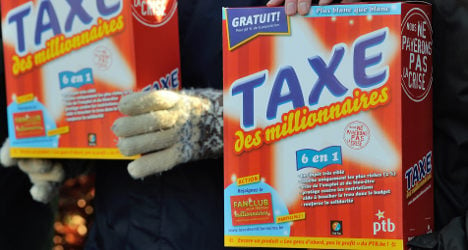 The 75 percent tax will be applicable for only two years, according to reports. Photo: Philippe Huguen/AFP

The tax had appeared dead and buried at one stage but President Hollande’s much-maligned millionaires tax will see the light of day, it appears, if only for two years.

According to reports in Les Echos newspaper the levy on incomes over €1 million will apply to earnings made in the year 2013 and 2014.

The flagship proposal of Hollande's election campaign fell at the final hurdle in December when the country’s highest court – the Constitutional Council – ruled the tax on the highest earners was in fact "unconstitutional".

An embarrassed French government was forced to go back to the drawing board but insisted it would return with a new proposal.

In his televised address to the nation in July, President François Hollande announced that his supertax, that had been slammed by Gérard Depardieu among others, would instead be paid by businesses and not by individuals as first proposed.

The levy on the portion of salaries over  €1 million would hit all firms, including football clubs, the government insisted, much to their anger.

But citing sources close to the government, Les Echos says the government will move to appease football clubs by imposing a cap so that companies will only have pay a certain percentage of their revenue.

And speaking after the publication of Les Echos report, France’s Finance Minister Pierre Moscovici suggested the government could even be ready to perform a u-turn and allow the country’s football clubs to be exempt from the tax.

With big-spending clubs like PSG and Monaco paying astronomical salaries to some of its players, football clubs will be hit hard by the new tax. (Will PSG be exempt from the supertax? Photo: AFP)

“We are looking at different views on this issue, but it’s true that we have football clubs which are in a fragile financial state,” said Moscovici, before adding that it would it not be possible to do a special measure just for football clubs.

The watered down proposal appears to highlight the fact the 75 percent tax is designed by the government more as a symbolic move to show it is making the rich pay their share in tough economic times, rather than a money raiser.

The levy is expected to only affect a few thousand taxpayers and will only raise a minimal amount of revenue as part of wider efforts to slash the budget deficit.

The Elysée Palace are not commenting on the latest report in Les Echos.

Hollande is determined that his flagship election promise will be implemented and will want finance chiefs to make sure it is watertight so he does not have to face the embarrassment of seeing it rejected for a second time.

He will face ongoing opposition from business chiefs, however, with the leader of employer’s union MEDEF Pierre Gattaz calling for the tax to be scrapped after he was elected in August.