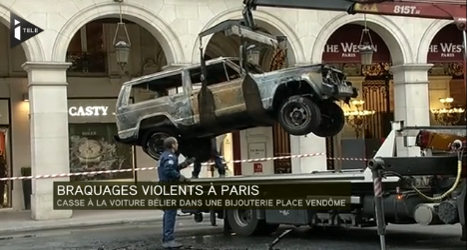 The car used in the ramraid atthe Place Vendome in Paris on Monday. Photo: Screengrab from ITele.

Four men rammed their car into an upmarket jewellery store in central Paris on Monday, smashing the shop window and making off with a €2 million ($2.6-million) booty, a police source said.

The heist near the upscale Place Vendôme is the latest to hit France after a spate of high-profile robberies in the southern resort of Cannes.

The police source, who wished to remain anonymous, said the men drove a large four-by-four car into the store in the early hours of the morning and grabbed jewellery and luxury watches worth an estimated €2 million.

They then set fire to the vehicle and escaped in another car.

Forensic policemen are currently going through the site of the robbery at the Casty store on Rue de Castiglione in the central first arrondissement of Paris, which is home to numerous jewellery shops.

Paris also witnessed another dramatic robbery on Sunday night when thieves armed with Kalashnikovs stormed a subsidiary of the France's rail operator SNCF in the capital's 15th arrondissement. According to reports, the robbers escaped with around €60,000 from the company which is in charge of managing restaurant cars on the TGV trains.

At the end of July, an armed man carried out a brazen robbery in broad daylight at a diamond exhibition at the Carlton hotel in Cannes, making off with jewellery worth €103 million in one of the world's biggest ever heists.

Paris has also been the scene of high-profile robberies.

In December 2008, three men emptied almost all of the stock of gems from the Harry Winston jewellery store. In 2009, police said they had recovered 80 percent of the haul.