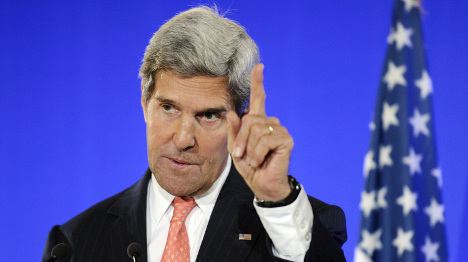 "This is our Munich moment, this is our chance to join together and pursue accountability over appeasement," Kerry said, referring to the 1938 Munich Agreement that ceded control of part of Czechoslovakia to Nazi Germany.

With Washington and Paris pushing for military strikes in response to an alleged chemical weapons attack by Bashar al-Assad's regime, Kerry said doing nothing could encourage more gas attacks.

"The United States, and our French partners know this, cannot stand by in the face of this massacre. We cannot let a dictator make use of the most terrifying weapons with impunity," he said.

Keen to reassure that military action would not involve ground troops, Kerry said: "We are not talking about going to war, this is not Iraq, it is not Afghanistan, it is not even Libya or Kosovo."

Kerry, whose mother was born in Paris when his grandfather was working here in the 1920s, has repeatedly described France as "the oldest ally" of the United States.

The most famous American public figure to charm the French in their native tongue was Jacqueline Kennedy, who studied in Paris during university and returned to the city in May 1961 with her husband John F. Kennedy. The rapturous reception she received led her husband to famously quip after the visit: "I am the man who accompanied Jacqueline Kennedy to Paris, and I have enjoyed it."