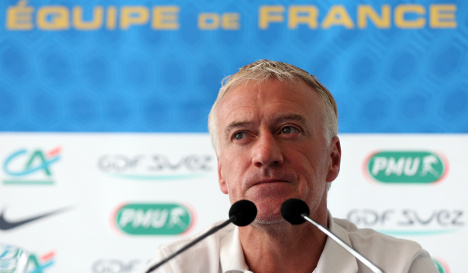 France's World Cup qualifying 0-0 draw in Georgia on Friday night meant the former Juventus, Marseille and Monaco coach's team have made history for all the wrong reasons.

Their last goal came in March in a 3-1 win over Georgia at home, but since then they have lost 1-0 to Spain in their European zone qualifying Group I, been beaten in friendlies by Uruguay (1-0) and Brazil (3-0) and played out a goalless draw with Belgium in another friendly.

If France go another 21 minutes in Belarus on Tuesday without finding the net, they will also set an absolute national record for the number of consecutive minutes without troubling the scoreboards.

And yet Deschamps says he is not worried, although he admits their struggles are becoming a problem.

"I'm not worried but if we're there (setting a new record) it's because we've got problems. I'm assessing it and doing everything to improve it," said Deschamps.

"Our problem for five matches is that we haven't scored. From that point of view it's impossible to win matches. We have to find a way to improve that."

"I don't have any miracle solutions but we shouldn't beat ourselves up either, we need to keep persevering to reverse this tendency. We need to work hard and add a bit more technical precision, more quick-wittedness and that part of success and luck that you have at certain times and is missing at others."

Deschamps has persisted with Real Madrid forward Karim Benzema, although he hauled him off after an hour in Tbilisi.

But the 25-year-old has now gone 20 hours and 26 minutes without hitting the net for club and country.

Until now, he has been an indisputable fixture in Deschamps's team but there was a sign on Friday that change is afoot.

Never before had Deschamps replaced his first-choice forward so early in a competitive fixture.

What he went for instead at that juncture was a combination of Arsenal's Olivier Giroud alongside Marseille's Pierre-Andre Gignac, not that either looked any more likely to endanger the goal netting.

But despite drawing five straight blanks, Deschamps denied the crux of the problem was a lack of talent.

"The attacking players have quality because they score for their teams," he said.

"I have players playing in Ligue 1, others in big clubs playing in the Champions League. The more I have, the better it is. There are also youngsters coming up who have potential but lack experience. I can't complain but it's up to them to show their worth individually."