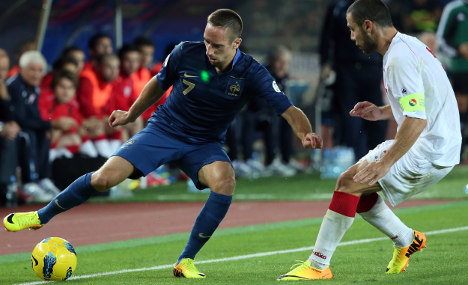 The stalemate left France level on points with Spain in Group I having played a game extra, albeit with the defending world champions in action against Finland later on Friday.

France coach Didier Deschamps opted for a two-man attack with in-form Arsenal striker Olivier Giroud partnering the misfiring Karim Benzema, without a goal for his country in 19 and a quarter hours prior to the contest in Tbilisi.

Having failed to score in their last four matches France were again very much subdued in the first half in the Georgian capital.

European footballer of the year Franck Ribery dragged a shot wide of the near post after cutting in from his favoured position on the left wing, while Benzema drew an unconvincing stop out of an otherwise untroubled home goalkeeper Giorgi Loria — the last man to concede a goal against France when Les Bleus won 3-1 in Paris back in March.

Georgia's Tornike Okriashvili saw a deflected long-range strike comfortably held by Hugo Lloris, but France were given a real scare as the midfielder went much closer five minutes after the break.

Alexander Kobakhidze's low cross from the right picked out Okriashvili, who had his initial effort parried back towards him by Lloris before he sent the rebound against the foot of the post.

Benzema's struggles continued with the ineffective Real Madrid forward hauled off just after the hour – shortly after heading a Bacary Sagna cross well wide – and replaced by Andre-Pierre Gignac.

The ball nearly broke to the Marseille striker minutes after his introduction as Patrice Evra drilled a low ball across the face of goal that ricocheted off Gija Grigalava and Mathieu Valbuena but just out of Gignac's reach.

Giroud failed with an acrobatic attempt to redirect a wayward Evra strike on target, while Ribery stung the palms of Loria as France's frustrations grew.

The visitors almost won it late on but Loria performed stoppage-time heroics to keep out Giroud's diving header before Sagna saw his effort brilliantly clawed away by the Georgian 'keeper.