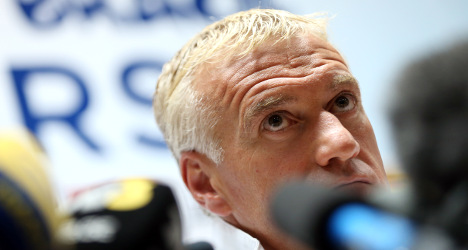 Shot-shy France need to find a cure to their goalscoring ills when they face Georgia in a tricky World Cup qualifying fixture in Tbilisi on Friday evening.

Didier Deschamps's side come into this month's qualifying double-header in Georgia and Belarus in second place in Group I, a point behind leaders Spain and four points clear of Finland in third.

Finishing above the reigning European and world champions may be beyond Les Bleus, but they should still be strong enough to claim second place and a spot in November's two-legged play-offs.

Nevertheless, to win in Georgia — where Spain toiled to a 1-0 win earlier in the campaign — and go on to reach next year's finals in Brazil, France must sort out their problems in front of goal.

Following last month's 0-0 friendly draw in Belgium, France have now gone six hours without scoring since their 3-1 win against the Georgians at the Stade de France in March.

It is largely because of their struggles in front of goal that Deschamps's side have lost four of their six matches in 2013 and the focal point of criticism amongst fans and the media has been Karim Benzema.

The Real Madrid striker is supposed to be the national team's star man, and yet he has not scored in 19 and a quarter hours on the field at international level since bagging a brace in a friendly against Estonia ahead of Euro 2012.

"Karim keeps being mentioned because of his lack of goals for us. I hope he puts an end to that as soon as possible," bemoaned Deschamps before the squad departed on Wednesday for Tbilisi, where the game will be played at 2215 local time (1815 GMT) to fit in with peak television viewing times in France.

Benzema has no shortage of support from his colleagues, with Arsenal defender Laurent Koscielny saying: "His qualities can't have disappeared overnight. He just needs that trigger to regain his confidence. The team is right behind him."

But while France boast the 2012-13 European player of the season in their ranks in Franck Ribery, as well as Marseille's Mathieu Valbuena, who excelled in the home win against Georgia, Deschamps must decide who to play in front of his chief creators.

He has options beyond simply sticking with Benzema at the head of a 4-2-3-1, with one being to pair the 25-year-old with Arsenal's Olivier Giroud, scorer of the winning goal in last weekend's north London derby against Tottenham Hotspur.

Another option is for Deschamps to hand a start to Andre-Pierre Gignac, the burly Marseille striker who was handed his first call-up since the 2010 World Cup after scoring three goals in the first three games of the Ligue 1 season.

"The coach must make choices. We are lucky to have quality strikers and that should give us strength rather than be a problem," insisted Arsenal full-back Bacary Sagna.

"Giroud is as much at ease at his club as he is with France. But we point the finger at Karim because he is a centre-forward and that is unfair. The rest of us players need to give him more support."

Elsewhere, with Tottenham's Etienne Capoue and Lyon's Clement Grenier having pulled out due to injury, it seems likely that Josuha Guilavogui and Geoffrey Kondogbia will play together in central midfield.

Temuri Ketsbaia's Georgia side have collected just four points from five games and have scored just three goals in that run.