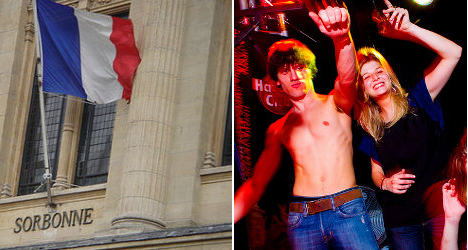 Congratulations, you’ve been accepted on a French study programme along with thousands of other lucky foreign students.

You’ve packed your pocket dictionary, a beret and a garland of garlic but are you really ready to embark on a Gallic adventure?

No matter how prepared you think you are, you’re bound to encounter some problems as any seasoned foreign student will warn you.

Whether it’s an apartment scam, an untrustworthy "new best friend" or a lost passport, at some time or another the chances are you are going to get yourself into a scrape or two.

The one place that knows a thing or two about the kind of pickles students get themselves into in France is the British Consular, which has taken the step of issuing a series of warnings this week in order to help students stay out of bother.

“Every year we are contacted by students who have experienced difficulties during their time studying in France. We hope that these tips help ensure fewer students have difficulties," UK Ambassador Sir Peter Ricketts told The Local.

Here's what his staff are advising:

Flat-sharing websites are like Disneyland for many scammers, who can't wait to take advantage of newly-arrived naïve students.

“If you’re asked to pay a deposit by cash money transfer, be wary – does the flat actually exist?” warn embassy staff. “We talk to people every year who have been a victim of scams like this one.”

If you’ve had no luck finding our apartment, check out The Local's top tips for finding a flat in Paris.

Students from Britain spoiled by a free health service are often unaware that you have to pay upfront for healthcare in France.

“You’ll need your European Health Insurance Card to get a Carte Vitale, and you should get top-up insurance too,” say Consular staff. “Talk to the French university about this. Don’t wait until you’re ill, as you may have to pay for your medical costs up front.”

“I’m young, why do I need insurance?” you may ask. There are many reasons why you may need travel insurance, ranging from a healthcare concern to a cancelled flight. And don’t just go for the cheapest deal.

No doubt you’ll be meeting lots of exciting new people, after all, that’s one of the main reasons people study abroad. But how much do you really trust them?

“Back home, your friends will make sure you get home safely – is that the case here?,” asks the Embassy.

Binge-drinking may now be an official French word now but that’s no excuse to booze it up.

“We’re not going to tell you not to drink (that probably won’t work!) but do make sure that you drink sensibly,” warn Consular staff, who can often be seen enjoying a sensible "demi" (half pint) in bars near the Consulate on a Friday evening.

No matter how fluent you are in French you are not a native speaker and should watch out for misunderstandings.

“Does that person understand what you’re saying? Does he (or she) understand that you’ve said no?”, staff warn.

Whether you’re from a small town or a big city like London or New York you should always keep one eye open no matter how small your adoptive town is.

“A big city is a big city, even when it’s ‘une grande ville’. Remain vigilant and use common sense, just as you would at home. Don’t carry your passport on you,” staff advise.

Take care of the pennies

Euros may look similar to Monopoly money but you’ll need every cent you can get. French cities like Paris can be pricey places to live, especially on a budget.

“Draw up a budget and stick to it,” the Embassy advises.

For tips on how to do this check out The Local's ten tips for living on a student budget in Paris.

This may seem like an obvious tip but you’ll have much more fun this way as well as gain a vital skill, says the embassy.

Don’t keep it to yourself

If the idea of living in a big foreign city scares the living daylights out of you take this simple piece of advice: “If you run into trouble, talk to someone about it. Don’t let yourself be overwhelmed.”

Are you a student in France? Got into any scrapes you want to share with us? Let us know in the comments section below.