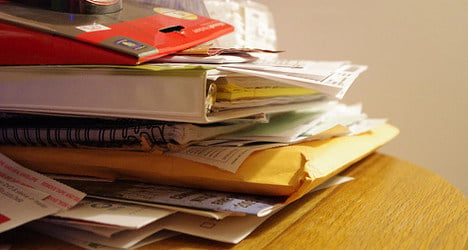 Finance Minister Pierre Moscovici described the bill as “shock therapy for a France that has become sick from the complexity of regulations”.

The “choc de simplification” (shock of simplification) is the result of French President François Hollande’s pledge to make savings by cutting down on red tape and on Wednesday Moscovici presented the remedy, which contains a series of measures aimed at making life easier for businesses, to the cabinet.

One of the main aims of the bill, which will be music to the ears of most expats, is to cut down on “paperasse” or paperwork in English.

Moscovici wants to limit the number of documents that have to be submitted to authorities.

According to Europe1 radio the bill, aimed more at small businesses, is designed to scrap the requirement to file documents for the creation of commercial companies, reduce the cost of registering a company by 50 percent and to simplify tax credits.

Reacting to the announcement of the measures, Bob Lewis, president of the Franco-British Chamber of Commerce and Industry in Paris told The Local the measures were “globally positive”.

“They are at least trying to simplify things. When starting a small business in France there have been too many organizations to deal with and documents to sign when compared to starting a business in other countries, especially the UK.

“The Government needs to work on the image as France is still seen as a difficult place to invest in and do business with, and should demonstrate through its actions that it wants to reduce the costs of employment and the flexibility of labour contracts.

“This will then show that the fundamental desire to create businesses is there.”

Lewis however criticized the French government for making it easier for certain businesses on the one hand but making life harder for those in certain sectors with a hike in VAT.

“The 3 percent increase in the VAT rate which the restaurant sector is about to suffer will hit demand and unemployment on a large scale in this sector and will affect many of the small businesses in France,” Lewis said.

However Moscovici does aim to make it easier for firms struggling to raise funds and those which are going through difficult periods to get their hands on some financial help.

The reforms include a section aimed at helping to facilitate crowdfunding and another to “improve the treatment of companies in difficulty”.

Perhaps one of the most significant reforms and one likely to be most appreciated by expat business owners, is the move to shift France’s burdensome admin and red tape online.

Moscovici wants to “facilitate relationships between business and government” by the development of online billing and high security systems for online payments.

“This will be seen as very good news for Anglos and expats,” Emily Montes, who works with helping foreigners set up business in France, told The Local.

“A lot of French business people might find that difficult, however, because they are often suspicious of anything to do with the internet.

“People need to read between the lines and find out exactly what these changes will mean for them and what advantages they will get. They should also not expect their accountants to know everything about these measures.”

Unfortunately, despite Moscovici’s measures being long overdue, they are still unlikely to come into force until 2014 and will have to be approved by parliament later this year.

His Finance Ministry at Bercy believes around €15 million could be saved through the measures. There could also be another positive impact.

According to the European Commission, a 25 percent reduction in administrative costs for businesses could see the country’s GDP rise by 0.8 percent in the short term and 1.4 percent in the long term.

And with France just having edged out of recession cutting retting tape seems a no-brainer for Paris.