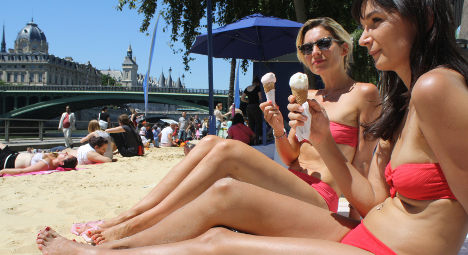 Sunbathers make the most of the summer at Paris Plage last month. Thursday is forecast to be the "last day of summer". Photo: Ana Aravalo/APP

“The best summer in the last ten years,” as one headline put it is about to come to an end, but not without one last day of sunshine and high temperatures.

The weather forecast for Thursday makes for very pleasant reading, even if most of the nation has returned to work or school and won’t be able to take advantage of the sun.

Temperatures in Paris are set to hit 32°C, the same as in the south of France, with most of the country forecast to bake under clear blue skies. It will be more cloudy in Brittany and parts of the west, as is expected, but temperatures will remain as high as 24°C.

(Photo of the weather forecast in Le Parisien newspaper)

For many in France the summer of 2013 will go down as one of the best and most memorable in terms of weather, a far cry from June when many were predicting a wet and miserable few months.

Meteorologist Frederic Decker from the Meteo News channel told Le Parisien newspaper that 2013 is the seventh hottest summer on record since 1946 and the warmest since 2003, when France was hit by a deadly heatwave.

Thursday has been described as the “last perfect day” by forecasters in Le Parisien so we better make the most of it. The weekend is set to see the return of wet and windy weather across much of the country and for the next two weeks the weather is set to remain “unstable”.

However despite the summer sun, the tourism industry in France has not reaped the benefits as it might have expected.

“We are well below last year,” said René-Marc Chikli, president of the Association of Tour Operators told Europe1.

The drop in takings has been put down to the impact of the economic squeeze which changed the holidaying habits of many French people and forced many to take shorter breaks.