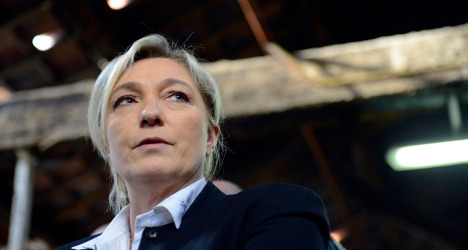 France's far-right Front National has suspended one of its local government election candidates after he posted a burning Israeli flag on his Facebook page.

The image posted by FN activist Francois Chatelain was accompanied by the words: "Here, this is France" and was condemned as anti-Semitic by Gerald Darmanin, a centre-right deputy in the National Assembly.

Darmanin wrote to FN leader Marine Le Pen and, on Wednesday, the party announced that it was starting moves to expel Chatelain.

"The images and comments posted by Francois Chatelain on his Facebook page are in total contradiction with the political line of the FN," a statement read.

"As a result, Mr Chatelain is suspended from the FN and his registration as a candidate for the municipal elections has been withdrawn. He will shortly be called before the party's disciplinary commission with a view to him being expelled."

Since taking over the leadership of the FN in 2011, Marine Le Pen has attempted to "detoxify" the image of the anti-immigration, anti-EU party that was previously led by her father.

Jean-Marie Le Pen, who remains an influential figure within the party, has been convicted several times for inciting racial hatred and is notorious for describing the Holocaust as a "detail" of World War II.