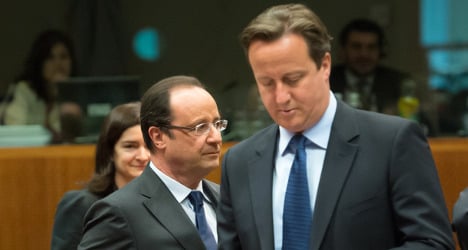 François Hollande and David Cameron had similar views on how to react to Syria, but will not be taking the same course of action, it seems. Photo: Bertrand Langlois/AFP

Sir Peter Ricketts is the current British Ambassador to Paris. Previously he held the role of National Security Advisor to David Cameron and was also the chairman of the Joint Intelligence Committee, which led him to give evidence at the Iraq Inquiry in 2009. Were you personally in favour of launching strikes against the Syrian regime?

Well as a civil servant I try not to express personal views about these things. I have stayed close to the government thinking and tracked David Cameron’s strong views on this. I think there was a strong case made, but it was always going to be subject to the agreement of the House of Commons.

Presumably initial discussions between the UK and France after the chemical attack of August 21st centred on military action?

Both us and France had the same reaction to the events of August 21st. We were both convinced very quickly that the regime was using chemical weapons. We didn't have 100 percent proof – you can’t in these circumstances – but if you look at the facts they were very strong.

The Foreign Secretary William Hague came over to Paris and met with his counterpart Laurent Fabius in the days after August 21st. At that point the idea of some kind of military intervention, or limited strikes, seemed appropriate but we made it clear to the French it was subject to two conditions – there had to be a UN process and it had to be approved by our parliament.

Have the French been aggrieved by the UK pulling out of any intervention?

I have the impression that they understand our parliamentary process and they respect the fact the Prime Minister needs support from parliament for something like this. The French are having their own debate in parliament on Wednesday and there will be other debates to come. They would still like to continue working with the British on this issue.

Could the UK change its mind or could the government offer the French any kind of military support?

The Prime Minister has been very clear on this. Having had the vote of the House of Commons, he doesn’t see the likelihood of him going back to get a second opinion. But you cannot rule anything out, especially if there’s a major development. The Prime Minister would have to respect the will of parliament which means we would not be involved militarily either directly or indirectly.

We will continue to work on the political and humanitarian fronts, but Britain won’t be doing anything militarily. We still want to keep up the pressure on Assad. What the regime did was appalling and we will be active players on the humanitarian and political side and give our support to the French.

Can you envisage France going it alone against Assad?

That’s obviously up to the French to decide. I have understood they have said that’s not really an option. So it will be either the US and France together or they won’t go ahead with it. I think it will be done as a joint operation.

Does the evidence released by the French including videos of the chemical attack provide a good enough case to launch strikes?

My own view and the view of the British government is yes, the case is very strong. It’s not just the intelligence that has been released but it’s what is available to everyone. There are videos out there on YouTube, there are testimonies from organisations like Médecins Sans Frontièrs who are there on the ground and we know the regime was launching attacks in that area of Damascus on that day.

It’s similar in terms of the need to convince parliament and the people [of the case for intervention]. Several MPs in the British parliament the other day made references to Iraq. It also reminds me of the Balkan wars when we had regimes using violence against its own people. The situation in Syria is worse than it was in the Balkans. We have had nearly 100,000 people killed and now the massive use of chemical weapons. It’s on a larger scale than the events of the Balkans. It’s really appalling.”